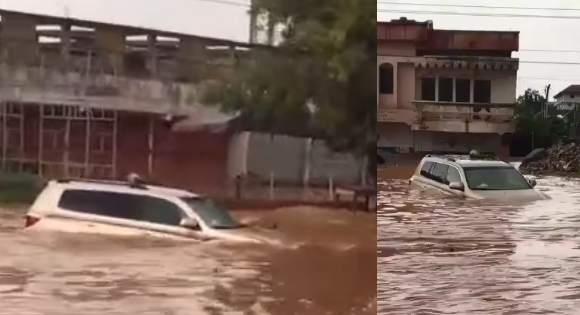 The continuous falling of the weather continues to giving nightmares to many residents in the national capital of Ghana, Accra. It was almost a national disaster on Saturday as the rains fell heavily for more than ten hours nonstop leaving houses to submerge in the floods.

The weather began sending the rainfalls from above the moment the cloud changed to a cloudy weather after the Ghana meteorological service updated citizens on what to expect in the cause of the day and leading to the evening hours of the night.

The unprecedented levels of the rains, inundated countless homes rendering other places no go areas where street dwellers ran for cover. Those who were able to find themselves on high levels of lands, used Saturday’s eventful day to store up the rain water for domestic and commercial uses as water has become a rare commodity in the national capital and other parts of the country, Ghana.

It is only in Ghana that when any tragedy strikes the nation, then you will see political bigwigs coming out with their four-wheeled drives of tax payers’ money to portray themselves as if they care about humanity. Choked gutters in the capital are encumbering the easy flow of the water when ever the rain falls on a larger version without much preparation towards the welcoming of the rain by many people as they continue to drag their feet; doubting the cause of nature.

As the rains set in without a ceasure, it then bothers on how the street children are going to cope with the wet weather because from the looks of things, it does not seem to ending anytime soon in the coming weeks or months. The National Disaster Management Organisation, NADMO, announced some few months ago that, they were fully equipped to handling any unforeseen spectacle that may emanate from the cause of nature.

But as the rain caused severe weather conditions in many homes on Saturday, it tells you that we have people in the country who only react with knee jeck attitudes when the need arises the most as in a case of a national tragedy.

Over dozens of major roads in the capital, filled up with flood waters as motorists ran for their lives. The rain trapped those who were travelling to their various destinations, restricting them to spend the night in the cars in which they were journeying in for purposes of safety. The leadership of the country must act quickly before it becomes too late where nothing could be done and as such, it will completely go out of control.