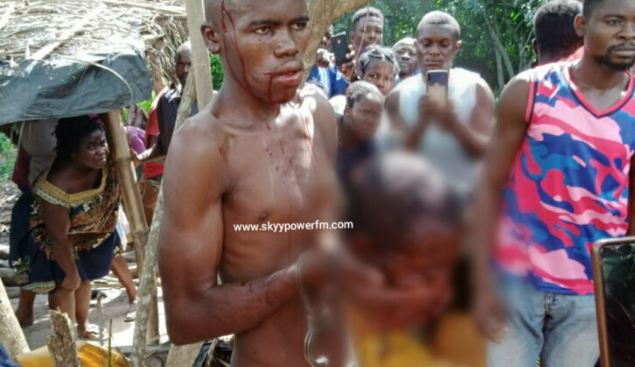 Residents of Sefwi Amoakrom in the Bia West District of the Western North Region, were shocked in the early hours of Thursday afternoon, July 8, when a young man, Francis Awuni, allegedly murdered one Mr. Azumah at his rice farm and chopped off the head which was to be sold to some unknown persons.

In an interview with the Assemblyman for Amoashed Electoral Area, Mr. Edward Takyi confirmed that the sad incident happened in Amoakrom where the deceased, Azumah, brought the suspect from the Northern part of Ghana to work as a labourer at his farm.

The suspect after cutting off his boss’ head stated that the victim, Azumah, had attempted to use him for money rituals which in revenge, fought back leading his death.

The victim, Azumah left behind a wife and six children.The Bia West District Police Command arrested the suspect and was put behind bars.

The body of Mr. Azumah has been deposited at Bia West Government hospital for autopsy.