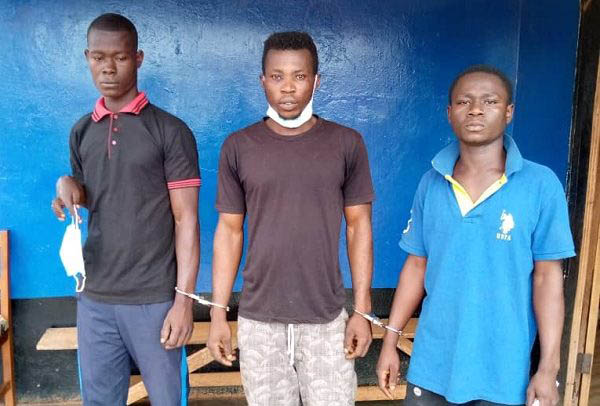 The Nkawie Circuit Court in the Ashanti Region presided over by Micheal Johnson Abbey has sentenced three armed robbers to a total of 75 years in hard labour.

Akwasi John, aka Sergeant, 25; John Fordjour, aka Meadow Shadrack, 23, and Abdul Razack, aka Shatta Movement, 19, who engaged in series of armed robberies pleaded guilty to the charges preferred against them.

Facts of the case indicate that on July 1, 2021 at 9pm suspect John Fordjour aka Kwadwo Fordjour who was wanted in a case of robbery, attempted to commit robbery and robbery was arrested by group of people in a failed robbery operation and handed over to the Manfo Police together with 13 wraps of dried leaves suspected to be Indian hemp and 50 tablets of Dizepam in his possession.

Suspect confessed to police during interrogation that prior to his arrest, he together with one remand prisoner, Akwasi John, and Abdul Razak alias Shatta Movement who was at large attacked and robbed a victim of his single barrel gun, mobile phones and other valuables.

He continued that few days afterwards, he together with the same gang attacked another complainant, Sulemana Mohammed at Kwaem Cottage near Asuhyiae with the said gun in the midnight and attempted to force his door open and rob him of his money and other valuables but the complainant in the process slashed his face with cutlass, sustaining wounds on his face and fired one warning shot and they escaped.
He later led police to the whereabouts of his accomplices, Abdul Razak and John Fordjor who were also apprehended.

The court sentenced accused Akwasi John to 15 years on each of the counts whereas accused John Fordjour and Abdul Razack were sentenced to 10 years each of the three counts but sentences shall run concurrently.

Additionally, convicts Akwasi John and John Fordjour were further arraigned before the court for the charges of conspiracy to commit robbery and attempt to commit crime to wit robbery.

The court ordered that exhibit being a locally manufactured gun with butt No.8417-72 retrieved be handed over to complainant, Kwame Twumasi.

Convicts were handed over to Kumasi Central prisons to serve their sentences.