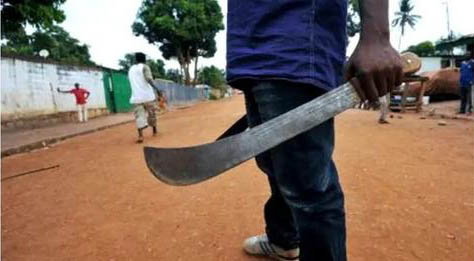 At least four persons including a one year old baby, two children and their mother have been reportedly killed in a late night raid by suspected armed militia from Ngbo community in Ebonyi State on Okokolo community in Apopogolo, Ado Local Government Area, LGA, of Benue state.

The attackers who were said to have stormed the community, yesterday, in a commando fashion also razed the home of the victims which was located along the boundary area of the two states.

It was gathered that the attack which came about two months after a similar attack in the area claimed the lives of over 200 persons leaving not less than 150 others injured has forced many residents of the community to flee their homes.

“They came into the community in their usual commando style at about 12 midnight when the people were fast asleep. Unfortunately their victims were the three children and their mother who were gruesomely murdered after which their house was burnt down.

“This age long conflict between our people and the Ngbo people has led to so many deaths and displacement of our people and it has continued to defile all genuine efforts to have peace restored in the border communities. As we speak people are already fleeing their homes for fear of being killed in the fresh attack,” the source said.

Confirming the development, Chairman of Ado LGA, James Oche disclosed that a child of less than one year, two children of less than five years including their mother were murdered in the attack and their house burnt down by the armed militia.

According to him, the militia carried out the attack in a guerilla fashion, maintaining that the hostility in the border area between Ngbo and Akpopogolo people had been there overtime.

“We have always experienced this guerilla attacks. You know the history of crisis between Ngbo and Ohaukwu and how we have always cried out that there should be a police presence in the whole of that area.

“The military Operation Whirl Stroke and other security agencies have been overstretched. The Ebonyi state government on their part have already established a police post in their axis and we are appealing to the Benue State government to do same in our area,” the Chairman added.

Contacted, the Police Public Relations Officer, Deputy Superintendent, DSP, Catherine Anene said she was yet to receive details of the incident.