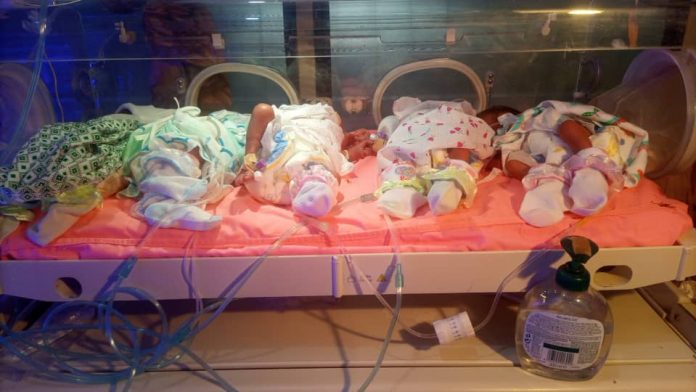 A fascinating spectacle has been beheld at St Martin’s de Porres hospital in the Eastern Region of Ghana, where a thirty-seven years only woman has given birth miraculously to five sets of children at the same time to the amazement of those who witnessed the spectacle in the hospital this very week.

Madam Helen Tettey, the mother of the children, was full of joy. She does not know that it is five children she is giving birth to at the same time because she is not a barren woman who would be giving birth to a child for the first time in her life experience.

The number of children that she gives birth to shockingly in the hospital, surprised and startled the people who were on the premises of the hospital before she finally delivered her children without any hitch or complications.

The shocking and revealing episode happened at Agormanya in the Lower Manya Krobo Municipality of the Eastern Region of Ghana.

Madam Helen Tettey earlier had five separate children before the ones she again gave birth to this particular week bringing the total number of her biological children to a whopping quantum of ten children.

It is more interesting and mouthwatering to learn that, all the five children given birth to, are all females causing more amazements and cheers to the woman herself because she is not expecting or thinking of anything in such a spectacular manner.

She just burst into tears of joy, praying and glorifying God, her ultimate deliverer who gives children to those he is well pleased with. It is quite common in Ghana to witness such wonderful experiences because many hospitals in the national capital of Ghana, had recorded countless cases of the same scenes where children are delivered from the womb of their mothers with ease.

Records of such instances are available at the police regional hospital in Accra, 37 Military Hospital, and other private health centers across the entire country.

God is so wonderful that, what others do not expect that you can do, it is what he gives and blesses you with which in return, silences and overwhelms the machinations of your enemies who are against your rise and progress in life.

The father of the children, also gladly received the kids with happiness when he saw all the children being girls to his shocking eyes.

It is not an easy thing carrying five babies in the belly of one woman at the same time due to the traumatic experiences and the challenges that she is likely to go through especially if her husband is not always available at the moment to give her a helping hand to assist in alleviating the plights on the life of the woman who is the person holding and caring for the babies in her body.

It is also the wish and the dream of every woman to give birth to such unusual and uncommon babies at the same time because it is when they tell the whole world and their doubters that yes indeed, their Lord has not forgotten or forsaken their tears in search of the fruits of the woman so that they can also call such babies as theirs.

May God continue to bless the womb of the women who are, committed, faithful, and supportive to the cause of the progress of their various families in every part of the country and the world as a whole.