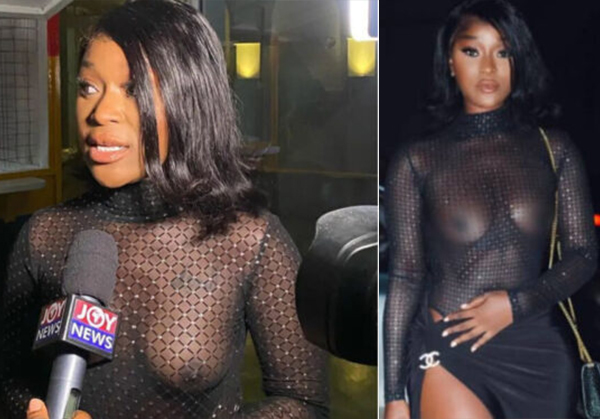 Efia Odo, a well-known Ghanaian socialite, has reacted after some netizens called for her arrest over her indecent outfit while listening to Kwesi Arthur’s ‘Son Of Jacob’ record.

Efia Odo called those asking for her arrest “jokers” in a series of tweets, urging them to instead focus on apprehending unlicensed miners. 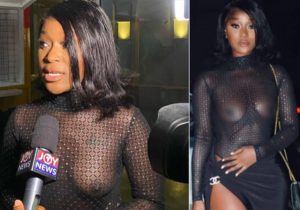 Efia Odo, whose real name is Andrea Owusu, questioned why her two pimples on her chest are causing so much concern.

Those clamoring for her arrest should also set their priorities straight and stay away from her chest, she added.

“You won’t go and arrest people who do illegal mining, the two pimples on my chest is what you’re worried about? Set your priorities straight and get off my chest! Jokers!! Catch me if you can”, Efia Odo tweeted. 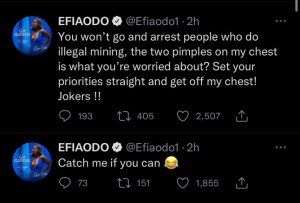 During the album listening of Kwesi Arthur’s ‘Son Of Jacob’, Efia Odo took centre stage following the revealing attire she wore to the program.

The actress wore a see-through black dress that exposed her whole bosom, which was deemed indecent.

However, Lawyer Maurice Ampaw called for her arrest and explained that her mode of dressing is a crime against public morality and decency.

Some Ghanaians also lambasted her and accused her of taking the spotlight from Kwesi Arthur during his album listening.