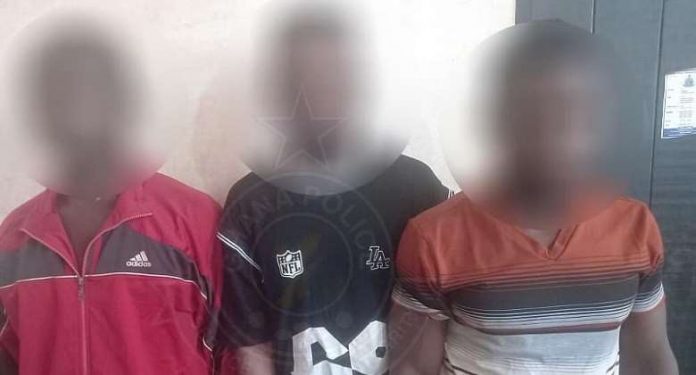 Seven hardened criminals who have taken it upon themselves to heavily engage in stealing people of their valuation materials in the Western Region, have been arrested.

Those engaged in the stealing of gold worth over 42.000 Ghana cedis, are finally nabbed by the public security forces in the region after a tipoff to the police officers in the region.

The seven, who would lure people into believing that they are into gold dealership in the region have been going round in the area where gold mining activities are going on just to deceive people of their expensive gold under the pretext of either refining the gold standard for shipping to be sold on high prices or to engage in other prospective customers who could buy their produce but rather they would take the gold and flee from the presence of the gold owners and go into hiding without thinking twice of what they have done to the gold owners who struggled so hard to accrue that kind of a precious mineral.

Now that the police officers have arrested to face the full rigours of the law, such individuals have put their hands very deep in money and they are likely to twist the hand of fair justice delivery to bring every form of the matter to rest. Many people are wondering how come such young guys with high level of youthful exuberant to engage themselves in something productive but rather they involved in that bad behaviour with the aim of making quick money without draining their sweat. Even though as those seven individuals have been arrested, it does not scare other criminal gangs to follow up with the path of those who have been captured by the police security forces in the region.

This brings to the increasing rates at which criminal activities and their related engagements have been committed without bringing a meaningful closer to those who have been perpetrating such dubious acts.