Abena Korkor was subjected to ridicule after posting her first unofficial video on her onlyfans channel.

Abena Korkor shared a snippet of the video on her official Twitter where she announced her prices and also asked fans to subscribe if they want to have a perfect view of her private endowments. 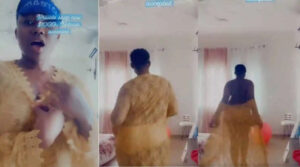 In the video Ghbuzznews spotted, Abena Korkor was viewed shaking her buttocks as she tried consciously to woo admirers.

This has resulted in a troll. Many have used the size of her underwear as a point to mock her. They said she was wearing what looked like a three-piece material that could sew a kaba and slit.

Laughing out loud!!! Remember a few days ago, Abena Korkor was in the news for dropping names of top celebrities who had had her in their beds… an allegation she came back to apologize for.

With her newfound career as a creator on Onlyfans, Abena Korkor has said she charges between $1,000 and $10,000 for subscriptions.

Private snap is live until I can join Onlyfans. DM me on Snapchat @missabenakorkor. Rate: $1000, bitcoin accepted. Now let the real hustle begin ! I am available for $10,000 and upwards pampering! No more settling for less. Loves a scam. Name ur price, get paid. #abkpornhub.

Abena Korkor has orchestrated several controversies after parting ways with TV3. With her being considered as a bipolar patient, many believe her condition triggers her relapses usually in her calling out names and later apologizing fr her action.

With her onlyfans page ready, it is obvious Abena Korkor wants to reinvent herself and create content that her followers would love and appreciate.