Kwame Asare Obeng, popularly known as A Plus in some few hours reveals on his official Instagram page that Abena Korkor slept with a guy in exchange for 3 air conditioners.

According to A Plus, Abena Korkor is a very big liar because she pretends to be sick to destroy people. He said Abena Korkor has refused to add some men who have slept with her to the list because those men paid her.

A-Plus said that Abena Korkor tricked a guy into that her house key is missing so she needs a place to stay for the night. The guy ends up sleeping with her at the Marriott hotel. Abena Korkor after this told the guy that he should buy her three air conditioners or else will blackmail him.

A-Plus said that Abena Korkor knows the exact job she doing and has nothing to do with her supposedly bipolar disease.

The Ghanaian media personality and former worker at TV3, Abena Korkor reacted to A Plus’ post that all that he said is true. However, he forgot to mention the name of the guy she slept with at the hotel on that day. If he A-Plus claims that she didn’t add that man to the list because he bought her 3 air conditioners. Why didn’t he also mention his name in his post?

Abena Korkor after this said that, if A-Plus was also not bold to men the name of this guy then it shows that this man has been giving A Plus money. She said that the man she slept with will be an A Plus sponsor. Check out Abena Korkor’s reactions to Kwame Asare Obeng’s post in the photo below: 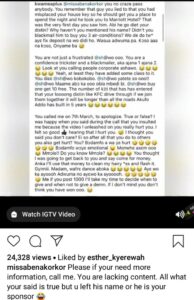