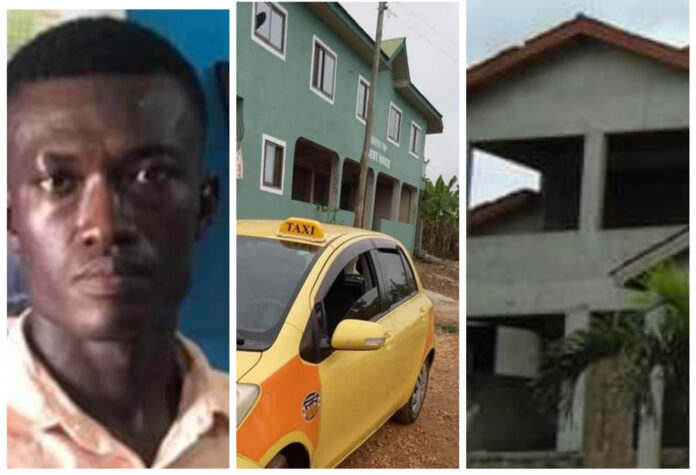 More and more revelations about the notorious Abesim murderer, Richard Appiah, have started popping up after he was arrested for murdering three children.

The close friend of the victim, Nyame Noah, has disclosed that he (Richard) owns about thirteen taxis and is working on a luxury house project.

Nyame Noah told Sunyani-based Ark FM that he sought Richard Appiah to assist him in finding work. Richard Appiah only asked him one question during the conversation.

“He asked me why, of all the people in Abesim, did I Nyame Noah choose to approach him alone? “

He replied, ” I told him that I’ve seen him driving different taxis, so I see him as a responsible taxi driver and a land surveyor.”

Read Also Images Of SHS Couples Flexing In Uniforms Will Astound You
That is when Richard Appiah admitted to Nyame Noah that he owned more than 10 taxis and was working on a house project. Taxi driving, on the other hand, is not his profession. He also does not want to rely on future rental revenue from his house.

Richard also informed him that he is a responsible individual who works at a large Sunyani office. As a result, he (Nyame Noah) should continue to pay him visits and assist him on the farm. He will get him a white-colored job at his employment once he is pleased.

This instilled hope in the jobless man. He continued to pay him visits and assist him in his cocoa field. Because of his unusual activities at the property, he accused Richard Appiah of plotting to kill him one day. After a failed attempt, he (Nyame Noah) decided not to approach him again.

Read Also My biggest fear is divorce – 41-year-old Genevieve Nnaji reveals why she is still single
“I suspected him because he would take up a cutlass and stand behind me. He will pretend to be weeding when I see that. He will be looking me down, trying to raise the cutlass again as soon as I turn my head”… Nyame Noah mentioned.

A few days later, Richard Appiah was detained. That was a strong sign that his suspicions were correct.