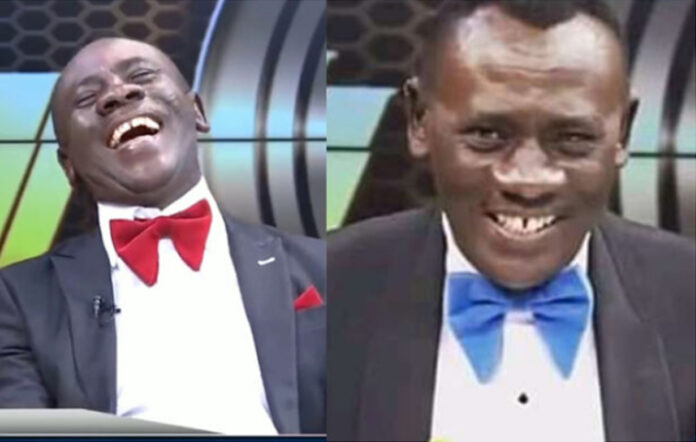 A Ghanaian actor who has become a television show host under strange circumstances without any reasonable and tangible justification arising from his educational qualifications,

has gained weight behind the scenes he always plans by putting cheers and smiles on the faces of Ghanaian people which is still causing them to follow him to the latter.

Akwasi Boadi, known in the showbiz circles as Akrobeto, has stated numerous reasons behind his name which has taken over the entertainment industry and the media in general after hosting some few television programmes in the national capital where he was clearly seen struggling to control the smooth progress of his activities on a live television.

The Kumawood actor who doubles as a news anchor on UTV media house, has indicated to his viewers and listenership the brouhaha surrounding his name Akrobeto which has earned him more accolades than ever thought by many people in the country most especially those living in Accra and Kumasi as a whole.

It has been reported that he was spotted over the last part of the week in a brand new vehicle where his fans mobbed him in the vehicle for some freebies during which he alighted out of the vehicle with cheers and praises been showered on him where others surrounded the car congratulating him for attaining such feat in his personal life despite his education debacles which is culminating from his massive difficulties in pronunciation and reading of news when he comes on air to broadcast news to his teeming audiences who are watching proceedings keenly as their amazing and fantastic superhero movie legends goes into the shoes of a talented news caster on United Television, UTV.

From the things being done by Akrobeto, it is clear that people should not always rely heavily on their academic performances before they are able to do something reasonable and laudable for their mother Ghana and their family members as well as where ever they may go apart from Ghana because if Akrobeto were to be seating down aloof claiming he is not intelligent or educated therefore he would resort to drinking or an armed robbery, such a thing will not earn him the public endorsement of his artworks that he does even though he does not perform them excellent but as the saying goes, practice makes a man perfect, he would surely reach his envisaged destination to the glory of God.