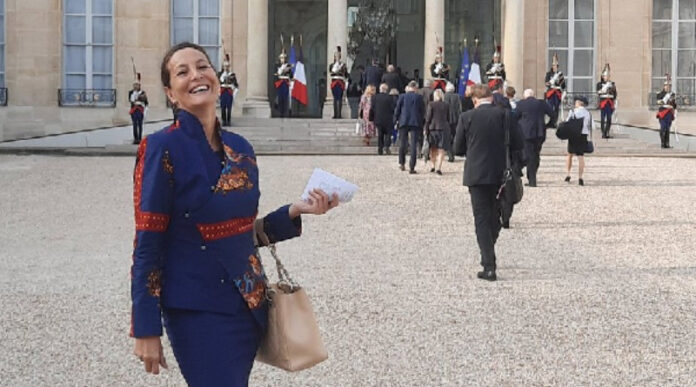 H.E. Anne-Sophie Avé, a former French ambassador to Ghana, arrived at the presidency in France while wearing a Ghanaian wax print.

Anne-Sophie Avé appeared smiling in front of the Presidential Palace wearing a blue-black pencil dress with a hint of a wax design sewed on the edges of her clothing in a photo she posted on Twitter.

“This morning at the French presidency Palace, @Elysee in a beautiful Ghanaian print outfit,” she shared on September 1, 2022.

Her post comes after she disclosed that she was given no helping hand after she landed in France with her twelve suitcases but would have received help in Ghana.

On August 26, 2022, Ghanaians held a beautiful send-off party for the French Ambassador after serving for four years in the country.

Many of the popular faces in the Ghanaian entertainment and media industry attended many send-off parties.

The likes of Stonebwoy, John Dumelo, Abeiku Santana, KiDi, Kuami Eugene, actress Kalsoume Sinare and her legendary husband Tony Baffoe, MzVee, and Salma Mumin, among many others, were present.

This morning at the French presidency Palace @Elysee in a beautiful Ghanaian print outfit by @Vlisco
💙🤍❤💛💚 🇬🇭 🇫🇷 pic.twitter.com/E94Tqp4ZiN