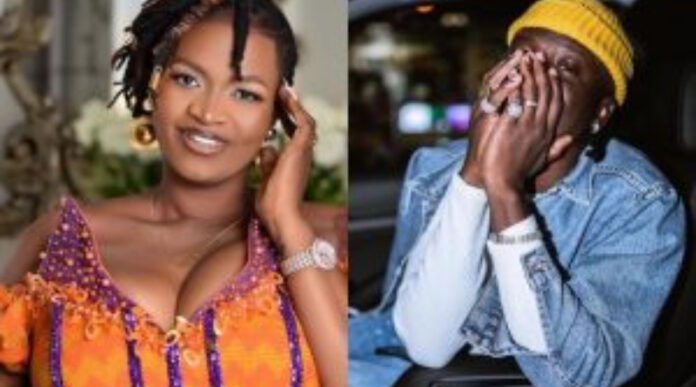 Following Stonebwoy’s most recent remarks regarding Ayisha made during an appearance on Accra FM, it appears that the two are no longer friends and have subsequently become sworn foes.

Stonebwoy on Accra FM claims that although he gets along well with Ayisha Modi, the rumor that she used to be his manager is untrue.

He went on to say that although he claims to be in his tight circle and that anyone can snap pictures with him, this is not always the case in reality.

These comments from Stonebwoy have intensely irritated Ayisha Modi – And consequently forced her to go hysterical on the internet for the past 5 hours now.

Earlier this morning, Ayisha Modi dropped a message on her IG page to call out Stonebwoy for being ungrateful and egoistic.

She also warned the BET awardee not to dare her else she will totally destroy him by dropping his dirty secrets on the internet.

Ayisha Modi is still not done with Stonebwoy yet and has since dropped another video to go raw on the dancehall musician.

Speaking in this video, Ayisha Modi stated with emphasis and clarity once again that Stonebwoy is very ungrateful.

She chided him to stop fooling and tell the world the huge amount of money she spent on him before he became the Stonebwoy we all know now.

Apparently, Ayisha Modi is very displeased and sad about how Stonebwoy described her on live radio, the reason behind her uncontrollable bitter rants.

Just a few months ago, the loud fanatic of the dancehall vowed that no matter what happens she will never have an issue with Stonebwoy.

Unfortunately, she wasn’t able to keep her promise, and it’s sad!