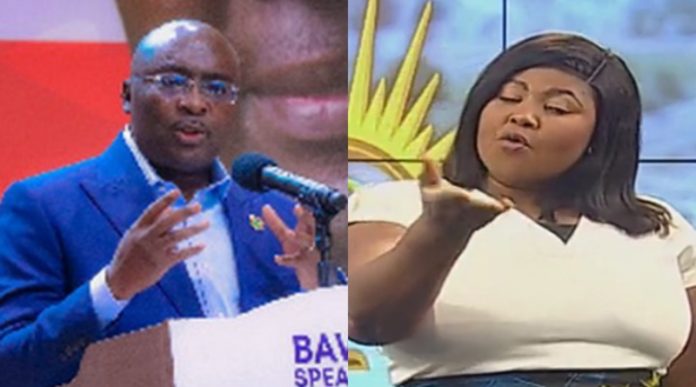 Onua TV’s media personality, Yaa Titi has boldly told the Vice President of the Republic of Ghana, Dr. Mahamudu Bawumia to do what Ghanaians expected him to do and not his current digitization agenda.

On Onua TV’s Maakye show, Yaa Titi was ranting about the continuous increase in the inflation rate in Ghana and that made her put the blame on some key economists and financial expectations in the country.

She mentioned the likes of the second gentleman of the land, Dr. Mahamudu Bawumia, and the Finance Minister, Ken Ofori Atta to be the reason why Ghanaians are suffering.

Yaa Titi told Ghanaians that, Dr. Mahamudu Bawumia is now going around talking about digitization and has stopped doing the things that made Ghanaians vote for him. She called Bawumia to stop whatever he is doing and go back to the economy and save Ghanaians.

She finally told Bawumia that, he is supposed to deal with the high inflation figures and not what he has been doing in the country of late.