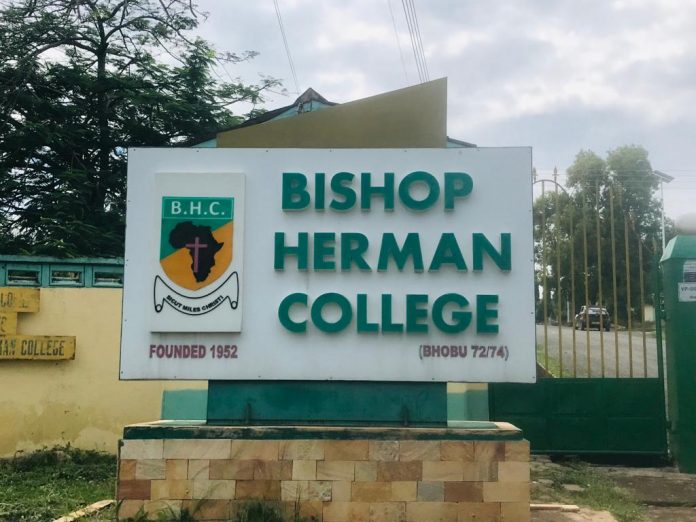 The authorities and students of Bishop Herman College in the Kpando Municipal of the Volta region of Ghana, are appealing for help as the school lacks proper sanitary facilities.

According to some eyewitnesses who pleaded on conditions of anonymity, students in the school are being seen openly defecating in the bushes adjoining the school yard which in turn, creates and causes massive foul and unpleasant smells in the whole area the moment there is a chance of direction in which the wind blows.

The school, which was established in 1952, did not receive any major significant facelift though it produced many scholars and notable personalities in the country and the world at large.

The students in the school are currently urging benevolent organizations to come to their aid so that things would be put into proper perspective for them in the school because as they are bereft of such amenities, it is practically becoming challenging for them to study on the basis that, there is no conducive environment available in the school where you could go and take proper care of yourself when the call of nature needs you to do so, so as not to embarrass yourself inadvertently in the full glare of the general public.

The ministry of education is very much aware of the happenings and the present challenges faced by the students of the school but nothing positive is being heard from the outfit of the minister and his deputies to help solve and rectify the menace of open defecation being practiced by the students of Bishop Herman College allegedly due to the unavailability of reasonable sanitary facilities in the school to serve those who are in urgent need of them because nature is something so heavily that nobody else could fight against let alone the whole student’s body.

Even if the education ministry is informed of the pertinent issues confronting the students and their management in the school but remains adamant and lackadaisical, they have the municipal authorities who are the ones in total charge of education in the municipality, and therefore, the onus lies on the school authorities to write them and seek their support because how many schools in the country need sanitary facilities for them to enhance upon their hygiene conditions, are replete that the government alone can not afford to meet the needs and demands of all the schools in the country let alone helping and coming to the aid of same.

Due to financial difficulties facing the government of Ghana where it is impossible to increase the salaries of public sector workers including the teachers, the public basic school teachers are currently on strike demanding better conditions of service in Ghana due to the high cost of living because their meager finances are no longer meeting the requirements in the market centers when they go to purchase items for their uses at home and their various workplaces.

The situation is so dire that they could not bear it anymore hence their resort to lay down their tools waiting upon the government to engage their union leaders in and through negotiations to settle out the impasse between both parties but painfully, the minister of defense, Dominic Nitiwul has revealed that the government does not have the financial strength to afford the needs and demands of the public teachers but they could only plead with them to return to the classrooms.

It is somehow ironic how the political leaders in Ghana are going about their activities because they would be taught by the same teachers who are still holding the chalk to impact knowledge but the moment they graduate then they turn out to become millionaires without taking into consideration those who impacted them positively with their sacrificial dedications and commitments for their development studies but here, they will within a twinkle of an eye, underrate such individual teachers who instructed them to become responsible people so that they could their economic fortunes around and the country as a whole.

We only hope that things get better for teachers in the country and the students of Bishop Herman College so that they can also share in some moments of joy and happiness because if they continue to remain in such insanitary and demeaning conditions under teaching and learning, then the country is gradually inching closer to the deadly tangent where people with heartlessness and ruthlessness are being churned out and produced largely to cause instability and chaos for the country in the long run just as a result of the improper care and lack of support either from the government or from their leaders and by an extension, such students and individuals turn out to the notorious, recalcitrant and hardened due to the apathy meted out to them from the certain crop of citizens when they need their offers the most but it never materializes.