Rising Ghanaian artist and hitmaker of the first and second sermons banger, Black Sherif is in the news again after breaking a record in Nigeria.

Black Sherif is making instantaneous waves in his music career quite recently and is taking Ghana music to the next level within a short period he was discovered in the Ghanaian music industry. 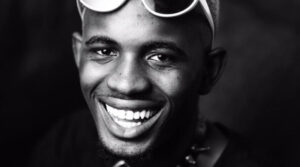 Blacko’s latest song tagged “KWAKU THE TRAVELLER” sad boy (KTT) is now the most played song in Nigeria according to Apple Music, then followed by Asake ft Burner boy (Sungba).

The hip-hop act star is obviously breaking boundaries and elevating Ghana music to the pinnacle, it has been a while a Ghanaian song has topped or been the highest played song in Nigeria.

There is more to expect from this promising young man black Sheriff in taking hip-hop to the next level.

In his recent interviews he has thanked Ghanaians and his fans for the massive support shown to him as he always says he came from the streets, so it is so amazing he has been recognized so far as a result of his immense talent.