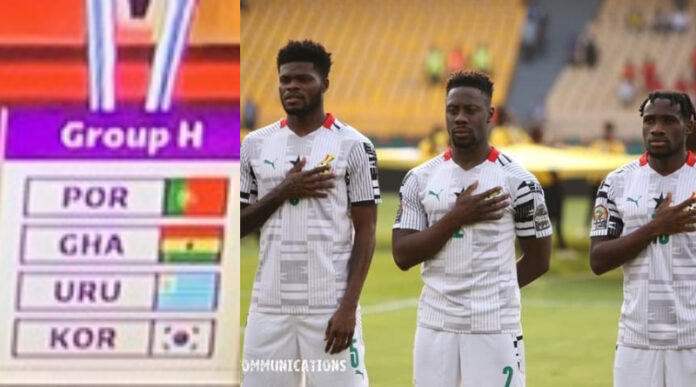 Black Stars of Ghana have been drawn in Group H with Portugal, Uruguay and Korea. The opening game for Ghana will be against Cristiano Ronaldo led Portugal.

Ghana will need to beat these teams or garner better points at the end of group stage matches to be able to advance to the next stage of the FIFA World Cup in Qatar. The West African nation will need to prepare adequately for the opponent. 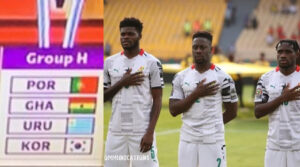 Black Stars of Ghana are part of five teams representing the African continent at the World Cup billed to be held later this year. Ghana is making the number with fellow African countries such as Senegal, Cameroon, Tunisia and Morocco. This implies that West Africa boasts of three out five countries with the two nations hailing from the Northern part of Africa.

Portugal hails from Europe and were seeded as well. Uruguay hails from South America and Korea hails from Asia.

Having known the opponent following today’s draw, the remaining activities for the mundial now rest on the shoulders of coach Otto Addo and his assistants. The technical handlers have a huge responsibility of ensuring they put together a better plan capable of making an impact at the World Cup.

Black Stars of Ghana qualified at the expense of the Super Green Eagles of Nigeria. This was made possible through the away goal rule.

Ghana drew goalless with Nigeria in the first leg at the Baba Yara Stadium in Kumasi.

The return leg ensued in Abuja, Nigeria, where Black Stars fought for a 1 – 1 draw.

Deputy skipper Thomas Partey fired Ghana into the lead in the 10th minutes, following short corner kick. The Arsenal midfielder was set up just in front of the goal post and brilliantly followed it up with a carpet shot, eluding the hands of goalkeeper Francis Udoho into the net.

Ademola Lookman later became the orchestra for Nigeria, earning a corner kick for the Super Green Eagles. This was after the referee had gone for a VAR review. Super Green Eagles skipper Troost Ekon took advantage of the spot kick to register his name on the score sheet.

First half ended a goal apiece amidst begging chances that came through. The second half saw an improved Black Stars as Otto Addo rigged changes that proved to be effective with time.

As the game ended a goal for each side, Ghana had their way through to represent Africa.