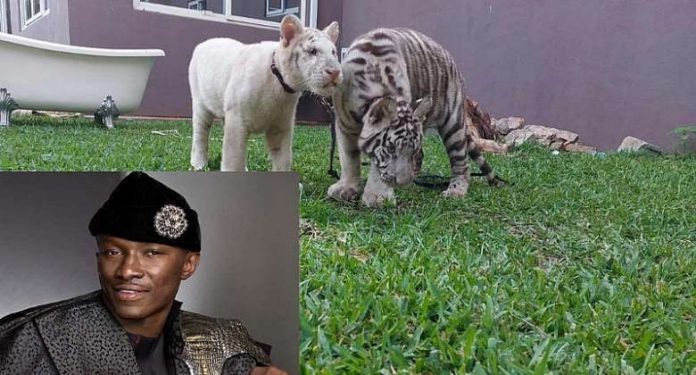 As Ghanaians continue to register their apprehension of insecurity in Ghana and other parts of the West African sub regions, a powerful business magnate has caused fear and panic in the lives of people who live around North Ridge, a suburb of Accra.

Residents who dwell at Ridge, near the British High Commission, are having a sleepless night due to the presence of two tigers in the community owned by the aforementioned business mogul. Nana Kwame Bediako, who is the owners of the two tigers, have been faulted for refusing to bear with the area dwellers when they informed him of their dislikes after he brought the said two lions into the area.

People living in terror due to the comfort of someone who thinks he has the financial will to dictate to residents what pleases his egos. Numerous complaints have been lodged against the presence of the tigers but nothing seems to be happening because, it is assumed that, he greased the palms of the police officers who are mandated to investigate every form of insecurity complain reported without any shred of doubts.

Some people in the community are saying that he has closed ties with the bigwigs who must make sure he does the right as a responsible citizen but he is doing the contrary and nobody endeavours to call him to order.

It is clear how money has bought the conscience of our authorities whereby they are abandoning the citizens to fight for their own personal security instead of they helping to alleviate the high level of insecurity in the country. We are waiting to hear what the ministry of the interior or national security would have to say concerning this life threatening issue. According to some details picked up, he brought those two wild animals before they grew up to reach their maturity.

Some residents put it that, it was at that time that they reasoned with him to send such deadly animals back but he blatantly disrespected them by not heeding to their pleas.