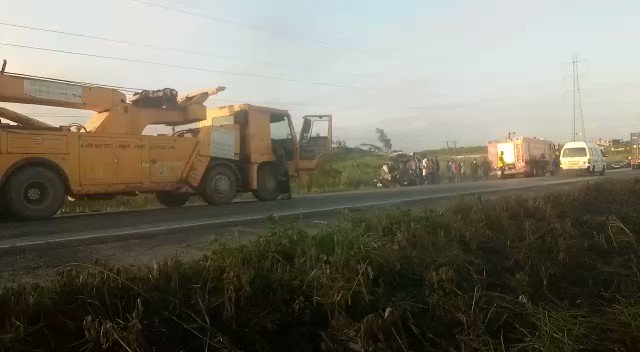 A tragic road carnage sorrowfully occurred yesterday in the Central regional town of Ayensudo, where fifteen people were traveling in a car that inadvertently collided with the oncoming vehicle in a head-on collision and took the lives of fourteen out of the fifteen people instantly.

The insightful incident transpired, unfortunately, when a certain truck heavily loaded up with bags of cement, sadly crushed head-on seriously leaving 14 people to perish in the process amidst mourning and weeping. As scores were feared dead on Wednesday immediately after the accident occurred, the incident scene of the unfortunate event where it took place, was colden off by the police patrol team of the Motor Traffic and Transport Department of the Ghana Police Service to forestall sanity and orderliness in the area.

Scores of people tragically lost their dear lives because of the negligence of a certain careless and reckless driver who could not do a thorough and decent job but rather, embarked on lawlessness and lackadaisical attitudes because he was driving a heavy-duty vehicle thinking that he was mightier than the other driver who was manning the vehicle with the fifteen occupants in the car before that sorrowful occurrence unfolded yesterday in the Ayensudo, of the Central region of Ghana.

Many people are pushing the blame at the doorsteps of the Ghana Police Service for doing completely nothing in formulating regulations and laws that would guide the operations of such heavy-duty trucks on our roads because they have become major threats and hindrances to scores of motorists and pedestrians who struggle to use the roads quietly.

The reckless manner in which a lot of the drivers are driving their vehicles is so horrifying and heartbreaking to the extent that, even if you draw their attention to such misconduct, it is as if you are not in the system because they do not fear the presence of the police officers on the road due to the assumption that, the officers are tightly cornered in their pockets hence their inability to arrest and prosecute those who are found culpable of offending and going contrary to the traffic regulation acts but it is not forth happening.

We are living in a lawless country where everyone does whatever pleases him or her with impunity because there is no dignified individual to take up the mantle and say I am charging you for this offense or the other bearing in mind that, money is the influential material talking undertone and that is the main reason why the police administration had been indicted in a perceived corruption index analysis and survey which portrays the institution as the second most corrupt public officials in the whole country of Ghana.

If it is true that we have men and women in the police administration who are working in the motor traffic and the transport department, MTTD, laws must be enacted that heavy-duty trucks could only be allowed by stipulated laws of the country to work during this or that period so that sanity and decency will be a thing of the day but yet still, we have officers who are being paid the sweat of the citizens but nothing meaningful or tangible is coming out of their responsibilities to the nation even though they are trying their best.

Many people had earlier advocated that such heavy-duty trucks should be permitted to transport their goods or any other materials during dawn hours but the officers whose duty it is to make sure such laudable ideas are implemented and adhered to by an extension will blatantly ignore every beacon of wisdom preached to them by discerning citizens of the land to help augment their efforts in restoring orderliness and sanity on our roads.