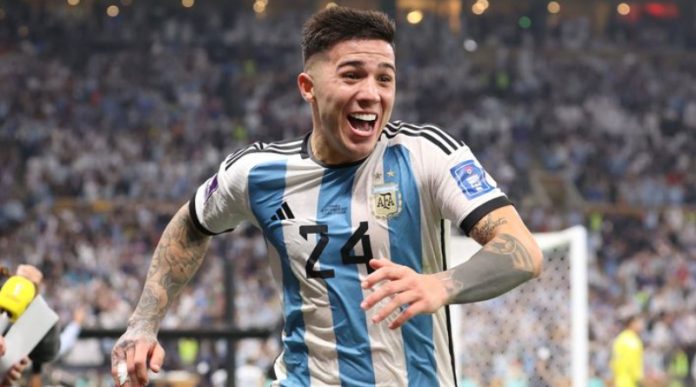 Enzo Fernandez, a 21-year-old international for Argentina, won the Young Player Award in Qatar for his crucial contribution to his nation’s third World Cup victory.

These performances were sufficient to persuade the Blues to exercise the valued midfielder’s reputed £112 million release clause, which is more than the sum paid to bring Romelu Lukaku back to West London in August 2021.

Would Fernandez’s arrival, though, be sufficient to free Graham Potter’s soldiers from their present difficulties? We examine what the Argentinean native would bring to Stamford Bridge in front of Chelsea’s matchup at home against Manchester City.

A star in Qatar

While known as an emerging talent at Benfica, Fernandez’s dazzling performances in Qatar saw him truly announce himself to the world.

With just three international caps prior to the tournament, Fernandez started Argentina’s first two group games from the bench, scoring a terrific curling strike in the second of those appearances, against Mexico.

After that moment of brilliance, he was immediately installed into Lionel Scaloni’s XI for La Albiceleste’s final group clash with Poland and that is where he stayed for the remainder of the tournament as the South American giants secured a memorable crown — beating previous champions France in the final.

Thriving alongside Lionel Messi as a classy deep-lying playmaker throughout their triumphant campaign, the Argentina skipper lavished praise on his young compatriot.

Benfica paid less than £10m to sign Fernandez from River Plate last summer and he has since started all 14 of the Eagles’ games in the Portuguese top flight, as well as a further five in the Champions League.

Three goals and five assists this term are impressive for a deep-lying midfielder and that is not the only area in which Fernandez has thrived this season at club level.

Featuring in a double pivot alongside Florentino Luis, Benfica’s No13 dictates play with his passing ability and is given the freedom to advance forward.