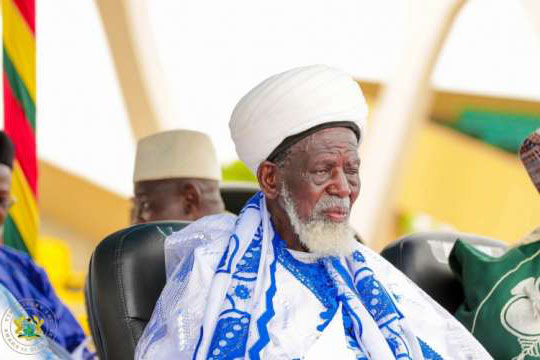 He said the donation was as a sign of mutual respect, solidarity and cooperation among Muslims and Christians in Ghana.

The National Chief Imam has been criticized by some Ghanaians especially members of the Muslim communities for donating to the project.

For instance, a Former Ghana’s High Commissioner to Namibia and Botswana, Amb. Alhaji Abdul-Rahman Harruna Attah has said the National Chief Imam was wrong in his decision to contribute to the national cathedral project.

He said this act would sully the reverential status of the National Chief Imam although it was his prerogative to do so and should not be denied the right of expressing it.

Ambassador Haruna Attah said “As I was completing this syndication, the entire issue of the cathedral of doom was blown wide open with the announcement that the National Chief Imam (NCI) had donated a certain amount of money towards the Nana Addo Christocentric edifice.

“As a citizen, it is his prerogative and he should not be denied the right of expressing it but then, other citizens should not also be denied their rights to “like” or “dislike” – apologies to social media jargon. But I do not agree with him and his gesture is not representative of all of Ghana’s Muslims.

“With his centenarian years, he has been ennobled and his advisors should have insulated him from acts that would sully his reverential status. Now they have opened him up to the barbs of society, which is unfair. His advisors have done him no good. I remember many years ago, this same kind of misadvise led him to be a guest at an event in which the organizers insensitively made him present an award related to one of Ghana’s breweries. I was there! The embarrassment was deep, undeserved and unfair!

“Not surprisingly, with this most recent faux pas, the social media has been agog and my WhatsApp has lit up with many comments, a few of which I share below:

“The National Chief Imamship is a creation of the Rawlings Era. For a long time after its creation the various imams especially in the North were independent of the office.”

“Christian denominations like the Catholic Church have more resources than Muslims. Have they made any such a donation? This donation is coming straight from Jubilee House and specifically Dr Mahmud to bolster his image before the church.”

“Ahl Sunna only tolerates him but do not defer to him on issues of creed or rituals. They follow the Wahabi Salafist puritan version whilst the NCI goes on the more permissive and mystic inclined Sufi school.”

“His Muslim umma are suffering and beggars on the street and he has that amount to donate for building of a cathedral or he is also doing politics.”

“For sure. I don’t think the Honourable Chief Imam will cheapen himself and donate for this type of project. His advisors will have even kicked against it.”

Responding to a message on the Good evening programme on Tuesday August 31, to the effect that Muslim students need scholarship to study but are struggling yet the Chief Imam has donated this money that could have been used to support the students, Sheik Aremeyaw said the fact that the Chie Imam has not given scholarship to one or two people does not mean he hasn’t been helping people.

“The National Chief Imam has paid medical bills of people, he has paid fees for people,” he said.

He added “ He is also building schools.”

He quotes Quran Chapter 60:7,9 and I wish that everybody will read it and understand the import of it . This particular test is not just talking about tolerance, it is talking about empathetic relationship that is why it talks about Kind treatment for those who do not share in your faith chase you out of your homes . For those of us who studied at the University, Comparison Study of religion , I call on any religious activist to go and find out, in religious terms, when we talk of empathic religious relation, what does it mean.

“It is the most authentic relationship that we build that makes our relationship more meaningful in terms of the support we need and then also the mutual respect to the point of mutual solidarity and cooperation.”