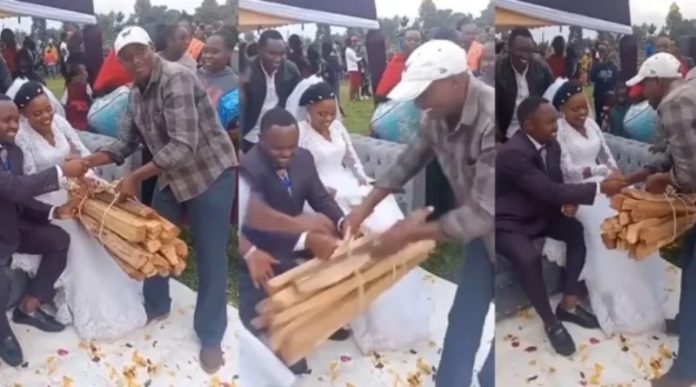 The moment a wedding guest gave the newlyweds firewood gift was captured in a funny video that has become the talk of social media.

The man gave the couple a bundle of firewood cheerfully, and they gratefully accepted it while beaming with smiles.

The gift was happily accepted by the newlyweds, however several social media users who saw the humorous video expressed their disdain at the wedding guest’s gift of firewood.

Some believe that the presence of firewood is a bad omen and predicts financial hardship for the couple for the remainder of their time on Earth.

Because of his “evil” motives, the opponents of the gist also stated that they would refuse the present and evict the man from the location.

Others have defended the man with the claim that he gave it all he had, and as a result, he deserves praise and appreciation for his thoughtful act.

Reacting to the video, @ify_chuta wrote: “for bbq. Everything should not be attributed to poverty. The couple appreciated it because they know it’s the man’s area of business and he offered from his heart.”

@seunodutayo wrote: “it’s not the gift that matters, see the happiness. Nigerians have a long way to go oooo. Everything is money to us.”

@lincoln_city_empire wrote: “I will reject it cause that a bad sign to my marriage.”