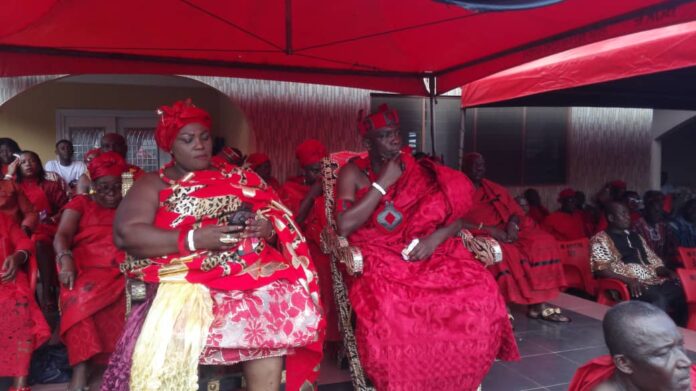 The government has done little for kpobiman because the roads network are very bad and the has been change of government and also need schools in the community.

According to him, he and his elders are ready to give government land for school and police station that will help security situation in the community faster.

Speaking in an interview with the media, the Kpobiman Mantse, Nii Tetteh Mensah Kootse I, after sprinkling of Kpokpoi to the principal streets of Kpobiman, call for Coexistence among the traditional authorities in the Ga state.

According to him, his land his not a stool lands but rather a family land which was bought from Gbese Stool from his forefathers and for which he is a grandson.

It has been observed that most litigation come when some chief’s engages Landguards which normally create problem for them in the end round and also warned them to desist from such practices.

He appealed to government to come to the aid of education and that looking at the distance from which the children walk to schools at Amasaman, Kotoku and other communities was not promoting learning among the youth because before they return home from school tired and most often they do not do their homework and assignments to do it on time.

According to him, he had provided Information, Communication and Technology Centre, latrines and was planning to put up a clinic to bring healthcare delivery to the doorsteps of the Kpobiman township.

“Let me send a word of caution to parents that cease engaging their children in trading, but instead invest seriously in their education as that was the only sustainable legacy they could bequeath to themselves in future ahead”He warned.

He appealed to the children to learn hard to become good leaders in future to assist in the development of the Ghana progress.

Nii Tetteh Mensah Kootse I, call on philanthropists, non-governmental organization and the Ga West Municipal Assembly to support the community in its initiatives to make life comfortable for the people and especially the road networks the link to through the community.

Meanwhile the Queenmother of Kpobiman Naa Afrowaa I commend the chief for his tremendous contributions to the growth of the community and assured that she is also going to do her best to support upcoming youth in her small way be it skills and vocational training.

She said she will hold talks with the parents to know their challenges and see how best she can also support them.

According to her, she is a mother for all not only the people from the Ga state but rather for them all regardless the tribe of origin.