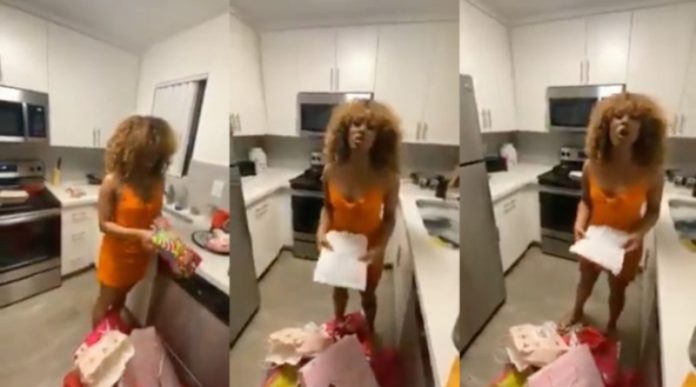 After receiving her DNA test results from her man as a birthday gift, the woman almost passes out.

The man had been raising the girl for more than three years, but he was unsure about her real father.

His wife had been keeping the truth from him all along while always making it appear as though he was the father of their fictitious daughter.

However, the man went for a DNA test on his daughter. It emerged that he was the biological father of the girl.

in order to not be so anxious and act crazy. He decided to keep the grim information to himself until it was the birthday of their daughter.

Cunningly, he wrapped the DNA test results in a beautiful gift box. He presented it to his wife and waited for her to discover its content.

Lo and behold, the woman could not tell what the box contained. She feverishly opened it with so much care and anticipation.

No sooner had she stopped and read the results than her husband told her to pack out of the house in a month’s time.

The woman tried to gaslight the man by stating that their daughter was theirs, but the man was not ready to be fooled.

He insisted that his wife pack out of their home since he had painfully discovered that he had played the father role to a girl who was not his daughter after all.

The woman felt like vanishing into the thin air. She threw her arms about as she could not understand how and why such a piece of information was relayed on her daughter’s birthday.

“Why will you do this? she asked.” “I am not the father” the man replied.

Check out the video below: