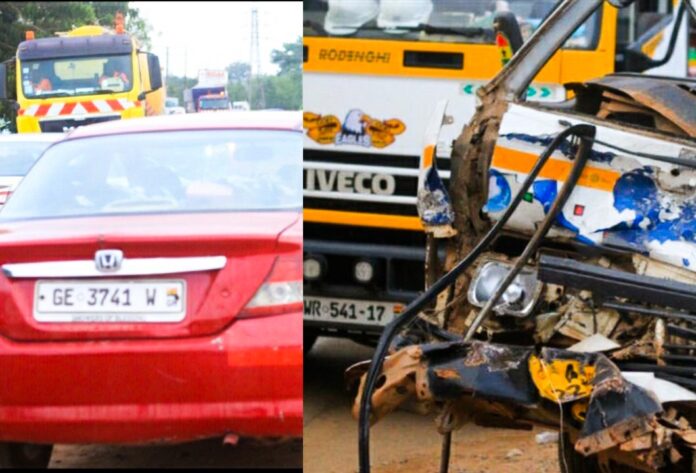 A mini bus carrying students and a Toyota truck loaded with full cement have had a head-on collision on the Apremdo road leaving student and many injured on Monday, August 9.

The accident was caused by a red Honda private car with registration GE 3741 W according to an eye witness, and alleged that the driver of the car was drunk.

He made it known that, the Honda stopped for some people to alight at the Apremdo Bus Stop, and when he was ready to set off on the main road, he did that without checking the incoming vehicles, causing a Toyota truck coming from behind to forcefully apply it brakes leading it to veer off into the lane of the other to collide with the mini bus carrying students.

The driver of the Honda didn’t stop to check the mess he has caused until he was chased by the Toyota truck driver and some others with a taxi.

Also, the victims of the accident, driver of the bus, conductor and all the injured students, though total number not confirmed have been admitted at Apremdo hospital and are currently receiving treatment.