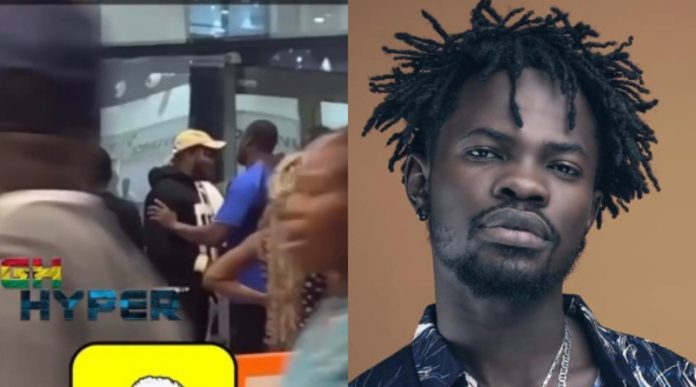 Peter Fameyeh Bozah, better known by his stage name Fameye, has made a stir at the Kotoka International Airport after his team was denied admission to the check-in/departures area.

The winner of the 2022 Vodafone Ghana Music Awards (VGMA) Songwriter of the Year was observed clashing with security agents at the airport in a video uploaded by blogger GHhyper on his Instagram page.

Fameye was surrounded by more than five security personnel a short time later, dressed in a black hoodie, a nose mask, and matching sweatpants, giving him an incognito appearance.

The uproar generated by the artiste at the airport attracted so much attention that people took out their phones to record what happened.

The incident has sparked discussion on social media, with some individuals sharing their comments.

Among the comments are:

“I think they’re just doing their job no need for tempers to fly,” a user said while another asserted that “This is what happens when stardom eats into your head.”

Another user added, “If you are not traveling, what are you going to do at the departure hall chale we got to be sensible small there is an open area there for dem to do there whatever before you can carry y’all self to the hall ah well.”