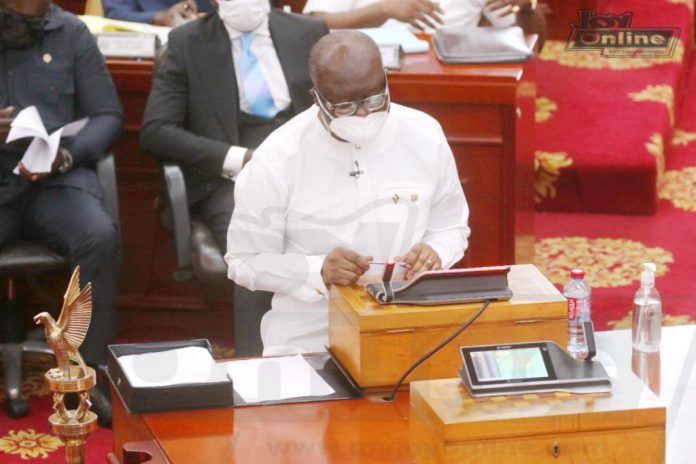 The Minister of Finance and economic planning was highly expected to present the midyear budget review for this year but unlikely for him, he did not show up in Parliament for the presentation due to other national assignments.

The minister of finance, is the head of government of Ghana’s delegations having negotiations with the World Bank currently for possible financial bailouts for the eighteenth times since Nana Addo Dankwa Akufo Addo took over as the president of the republic of Ghana without any tangible reason to be provided that yes indeed, as he took over the reigns of the country, these are the prosperities and developments that his leadership has been able to bring to the doorsteps of Ghanaian voters but rather disaster and destructions coupled with joblessness and murder in every part of the country, Ghana.

The minister gave the assurance that he is not running away from the presentation of the budget but due to his official duties in engaging with the representatives of the International Monetary Fund, IMF, he is unable to avail himself in Parliament to addressing the chamber on the details of the midyear budget review and as a result of that, the budget review has been postponed to the last week of July, 2022.

He indicated that, he could not be available for the presentation until the finalisation of the talks with the world bank concerning the financial bailouts that the government of Ghana has instructed him with an executive authority to secure so as to help restore the ailing and struggling economy of Ghana which many of the ministers under this very regime, have denied as ever in comatose but they were quick to add that, they are the only people with the entrusted mandate and political acumen to help bring back the economy of Ghana on track.

Ghanaians have lost total confidence in this failed administration due the double tongued individuals who have associated themselves with the government because they think they can easily deceive and con the people of Ghana and go escort free because of the way they will come out with their filthy tongues and gush out certain trashes from their stinking mouths, such fallacious statements are not helping to build the nation but destroying and attacking the integrity of themselves and obstruction of development in the country on the basis that, the country Ghana does not belong to any particular individual but it belongs to all the citizens of the country hence, the onus laying down on our political class to telling the truth because the people of Ghana are the ones going through the severe and austere economic misfortunes currently caused by this malevolent administration due to its reckless manner of handling the affairs of the nation without being called to account to toppled by the impatient of the citizens in Ghana.

The government is currently crying foul that there is no money available in the country to attend to the needs of workers including public sector teachers and yet, the president and his so called appointees are living lavish lifestyles because they are the ones whose forefathers built the country Ghana therefore, they must enjoy themselves and reserve the remaining resources of the country for their children to also come and inherit because it has become a dominion mandate to be transferred from one generation to the other with an impunity where the masses continue to wallow in an abject poverty without any help from the governing authorities to assist them out for an economic emancipation.

The president is actually serving his last term bid hence the collapse of the national economy because it is believed that he is doing this dangerous thing so that he causes a total economic mess for the next incoming administration either National Democratic Congress or any other political party that perhaps will secure the majority of the votes from the Ghanaian teeming youth with the political rights.

The original people according to them on the streets, they are not concerned about the presentation of any midyear budget review but what they are minded of, the food and water for them to see on their table even though they are going through economic difficulties, life must go on unabated because there is no way they are going to allow the negative impacts of this failed economy to derail their minds from the life God has granted onto their bosom graciously.