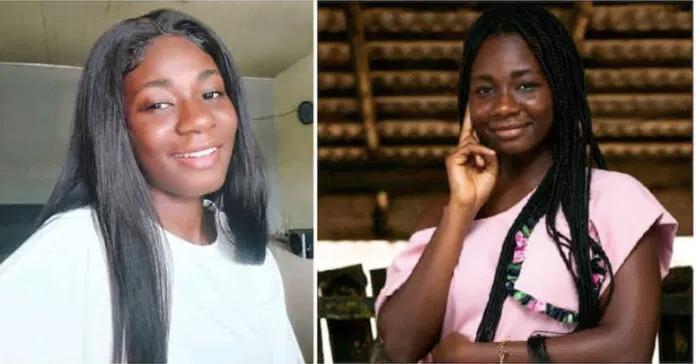 A reported first-class female graduate from the University of professional studies has taken a bold and audacious step to bridge the gap between her financial hitches and joblessness by selling footwear on the street for survival.

Nothing is surprising about the brave decision that she has taken because if she does not do it, who is going to do it for her?

Adventurous ladies are those who do not seat down aloof and be expecting a man to put food on their table before they eat but they are rather the ones who will go the extra mile to provide for the husband and the entire household. 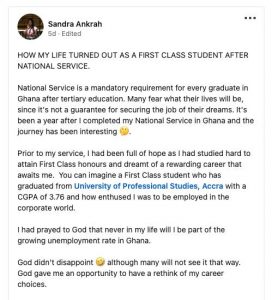 Nowadays, whenever someone finishes his or her tertiary level of education, then the eyes on the person are that; he or she is going to venture into the search of a white collar job but the question is who will create the job for such so-called graduates to come and work?

Someone who attended the university of professional studies, could not find any meaningful and valuable work to do with her first-class tertiary certificate rather, she sells ordinary shoes on the streets for survival in Ghana. 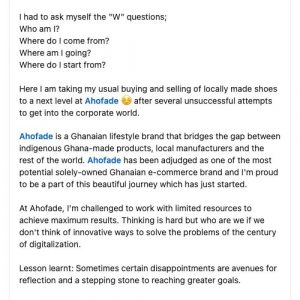 It is not clear enough to us her actual area of studies because it takes us aback as to why a first-class graduate sells shoes to make ends meet after finishing her professional course from a well-resourced institution of that caliber.

The argument has been advanced by many educationists that the kinds of tertiary courses being offered by students these days are not helpful and healthy in the sense that they are just graduating without any tangible professional skills being learned or acquired from their various tertiary schools so that they can remain productive in the job markets. Many people have argued that going to a tertiary institution does not guarantee your job security in the market but rather it just enhances intellectual capacity development for you as an individual.

Education professors are mounting their causes that traditional skills must be at the fingertips of students in case they do not find any sensible profession to venture into, they could be trying their hands upon some menial jobs that may not request or demand many skills from the individual member thereby, appealing to tertiary students to think outside the box and explore beyond the scope of the horizon so that they could avoid being dependent onto others who have become their breadwinners.

According to some of the lecturers, students nowadays do not want to have anything done with masonry supply, carpentry, or other traditional activities that would put food on their table but they are all hungry for white-collar jobs as if they have created the White collar job that they are looking for across the length and breadth of this fast deteriorating country.

According to the information communicated to other people from the said first class graduate who sells shoes, she tried countless avenues through which she thought of working or security jobs that would pay her lucrative amounts but never materialized because she searched for jobs upon jobs but everything proved futile.