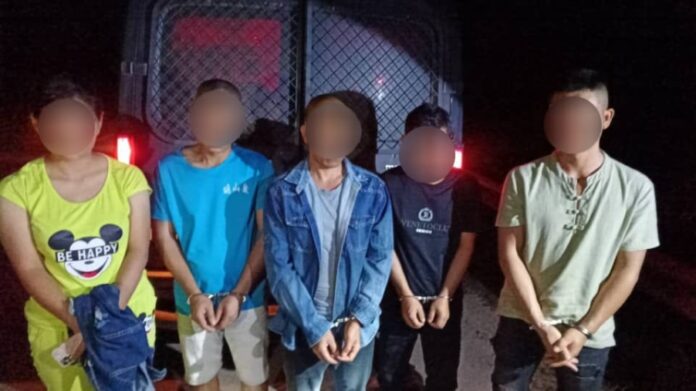 Some five Chinese Nationals who have taken over the land of the Western Region most especially, the Ellembele district area where they have been seriously engaged in illegal mining operations, Galamsey have been arrested.

What actually baffles the minds of Ghanaian people this day is that, it is not Aisha Huang who has been arrested amongst those Chinese nationals under detention but rather, another female Chinese lady who is also an accomplice notoriously identified as a kingpin in the operations of the unlawful operations and mining of gold entombed beneath the earth crust in the community without any certification and approval from the lawful authorities in Ghana.

The only woman who has been arrested along with these current four male nationals of Chinese origin, has completely shutdown the brains of many as it continues to beat the imaginations of those who still wonder and marvel about how they were able to secure those expensive earth moving equipments that they have being using to undertake their illicit galamsey operations and mining activities in the Ellembele district to be precise.

The activities of these individuals who are not even Ghanaian people before we even complain, are actually going out of hands and if drastic and proactive measures are not urgently formulated to avert such degrading activities against the lands of the country, things will further deteriorate and escalate because, the belief is that, there are prominent political individuals who have given concessions to such people to embark on such criminal activities so as to share with them, the proceeds thereof after their successful completion of task meant to be undertaken.

It is only on that clear stated fact and not one logic thinking step where the District Chief Executive officer himself for the same Ellembele district, Kwasi Bonzo, attempted and obstructed police officers who wanted to effect an arrest on those believed to be engaging in their heinous conducts because, he is also a severe beneficiary with the hypothetical assumption that, it is because, he is the head of security at the district hence his audacity by releasing concessions to such illegitimate operations to be going on persistently in the community without thinking twice about the ramifications and dangerous that it poses to the entire district and the country as a whole because, their illegal activities are heavily polluting water bodies in those areas.