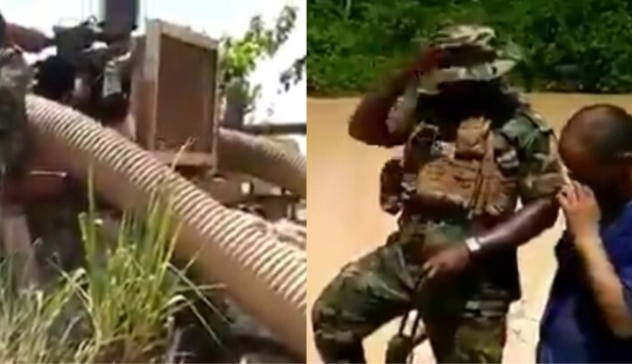 The dreaded activities of illegal miners know in Ghanaian parlance as ‘galamsey’ has caused the country almost all of its major water bodies that serve as sources of water for households.

A Ghanaian military officer has schooled a Chinese national who was destroying water bodies with illegal mining. In this video recording, the Chinese national stands speechless beside the officer as he got reprimanded for the damage he and his cohorts have caused innocent inhabitants of nearby towns and villages who rely on these water bodies.

A huge machine that collects water from the river to wash the gold and then discharges the contaminated water back into the river was found on the site.

When the officer asked the Chinese national if he would like to drink from the now-muddy river he shook his head.

The President of the Republic, Nana Addo Dankwa Akufo-Addo, recently authorized the Ghana Armed Forces, to commence an operation, to remove all persons and logistics involved in galamsey on Ghana’s water bodies, Graphic Online reports.

The Minister of Information, Mr. Kojo Oppong Nkrumah revealed this in a press statement dated April 28, 2021.

A total of 200 officers of the Ghana Armed Forces were involved in the operation.