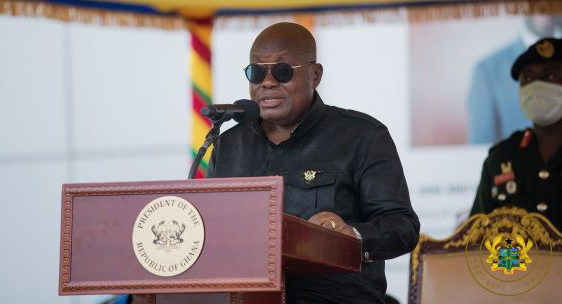 President Nana Addo Dankwa Akufo-Addo has encouraged everyone in Ghana to be counted in the 2021 Population and Housing Census (PHC) that commenced last night.

He said the exercise was an all-important process that would “enable us to plan effectively for the development of the country”, urging all persons who were in Ghana on the Census night, June 27, to ensure they got counted.

The President made the call when
a team from the Statistical Service, led by the Government Statistician, Prof. Samuel Kobina, called at his official residence at the Jubilee House to have the first family enumerated in the exercise.

The President officially became the first person to be enumerated on the first day of the 2021 PHC, after the celebration of the census night.

The national census was postponed in 2020 on account of the coronavirus pandemic. The execrise is the first to be fully digitalized in West African. It would employ the use of electronic gadgets and the internet to capture and transfer data for analysis.

President Akufo-Addo encouraged everyone in Ghana to cooperate with census officials and give all the information that the census was meant to provide.

The President assured that the information being collected would be treated in a confidential manner.

“I have no doubt of the integrity and credibility of those who are conducting this census, that they would keep to the provisions of the of the Act under which they are operating,” he assured.

President urged the Government statistician to ensure that the head count unified all demographics in the country.

“It was extremely important that the process should be an exercise of unification and not disaggregation, not putting people apart,” the President stressed, in reaction to queries by sections of the population that the census sought to marginalise their respective social grouping.

The President, who was in the company of his wife, Rebecca, were taken through the process for a period of almost 45 minutes, answering some 127 questions posed to them from enumerators.

Prof. Kobina, interacting with the President, said the data collected was strictly confidential and would not be used for targeting persons, or specific groups of people.

He said the information which would be used only at the aggregated levels, and put out for analytical work.

“It will de-identify all personal information and will be an anonymised data, not for tax purposes but only for statistical reasons,” he assured.

Prof. Kobina further allayed the fears expressed by sections of the public who have expressed misgivings about the intent of the exercise, saying the census was a non-discriminatory and an all inclusive activity.

He said the data to be obtained from the PHC would help in analysis based on demographics and other social characteristics for the speedy socio-economic development of the country.

Ghana carried out its last census in 2010 and the final result pegged Ghana’s population at 24.6 million.