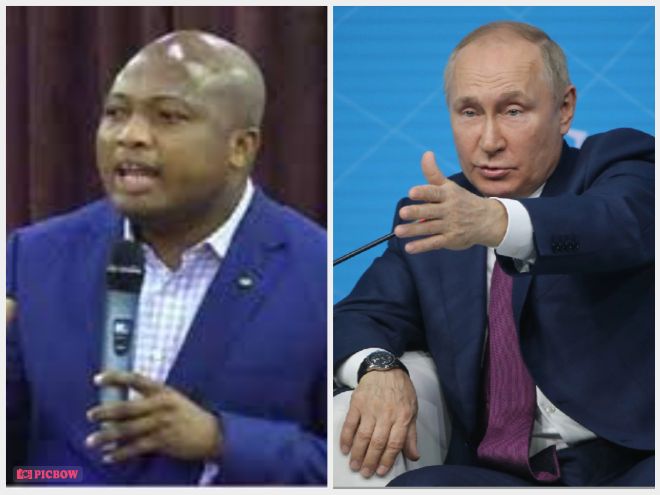 The member of Parliament for Tongu, Honourable Samuel Okudjeto Ablakwa, has indicated that from all his observations so far if Ghana does not take the necessary measures in place to render an unqualified apology to the president of Russia, Vladimir Putin, his next target of unleashing mayhems on the country with his armory, it would be fatal for the country.

He stated that certain indications available to him, are revealing that, the president is not happy about the comments passed by our current political administration concerning the war between Ukraine and Russia, which would be the cause for Russia to bear teeth with Ghana if such dangerous and reckless remarks are not expunged and necessary steps are urgently taken to offer an apology to the president because he believes he does not take kindly to the recent comments offered by some leaders of Ghana concerning the happenings ongoing between Russia and Ukraine regarding the terrible war involving the two nations over supremacy.

The national leader of Russia, Vladimir Putin, was recently blamed in Ghana for the current economic unfriendly environment shaping up in Ghana.

According to the leaders of Ghana, every form of problem or challenge facing the country at the moment must squarely be put at the doorsteps of Vladimir Putin and his nationals for causing financial infractions in the country. In the view of Hon. Samuel Okudjeto Ablakwa, the anger of the Russian leader, could easily be turned on Ghana because of the recent pronouncements against him and his involvement in fighting with Ukraine regarding the battle that is raging on in such two countries.

Currently, there is no official communication coming from the presidency yet in response to what has been suggested by the member of Parliament for Tongu about how the take reasonable measures so as not to incur the wrath of the Russian president, Vladimir Putin, in case he intends to unleash any attack on Ghana making available facts that he is not enthused about how some of the political authorities of Ghana, spoke of his fight against Ukraine.

Honorable Samuel Okudjeto Ablakwa stressed that, if steps are urgently not taken to immediately restore the friendship Ghana has with Russia, it could jeopardize the peaceful relationship between the two countries despite the drama instigated by the utterances of the current leaders in the country but if authorities in the country are mindful of their actions and taking measures to avert the unkind action that Vladimir Putin may wish to take on Ghana, it is not going to be easy for the country even though Ghana is currently facing a lot of financial challenges causing her to head to the International Monetary Fund, IMF for financial bailouts to undertake some unannounced projects that the government has indicated of embarking upon in the coming months after the money is successfully acquired by the delegation sent to negotiate on behalf of Ghana.