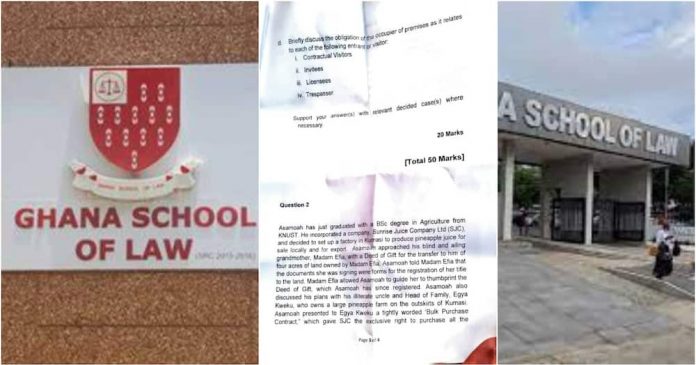 Integrity checks revealed, many of our institutions can not be trusted nowadays that morality has become a very scarce commodity for people to afford.

Since the development of every prosperous country largely depends on the citizens training and acquisition of knowledge with the fear of God inculcated in them, fair play must be the rule of law for all and sundry.

There are those who are eager to pass every ways and means just to make their way out so that they could bypass laid down procedures and rudiments stipulated for the passing of every form of certification and approval for testing aptitudes of individuals, money has a major role to play.

Suddenly, the same Ghana School Of Law, has emerged in the news again for a similar anomaly whilst examination questions meant for the students to attempt as rudiments meant to be the criteria for admission requirements, had been reportedly spreading and leaking like a wild fire within few hours before the commencement of the entire examinations.

The school authorities are currently tight lipped on the matter as nobody from the administration hierarchy, is willing to comment on this shameful and disgusting expos’e against the authorities of the Ghana School Of Law.

The gossip about the leaks of the entrance examinations is that, certain indications available have revealed that, some individuals have paid their ways out since they have the wherewithal to grease the palms of the officials in charge of the safe keeping of the examination papers.

There is no doubt that, such activities and anomalies are large quantum contributors of the prevailing crooks and hollow half baked graduates impersonating to be professional lawyers but rather, when thoroughly checked, they are quack elements in the country before, they have not qualified to be called legal practitioners but since they are financially resounding, they would buy their way out.