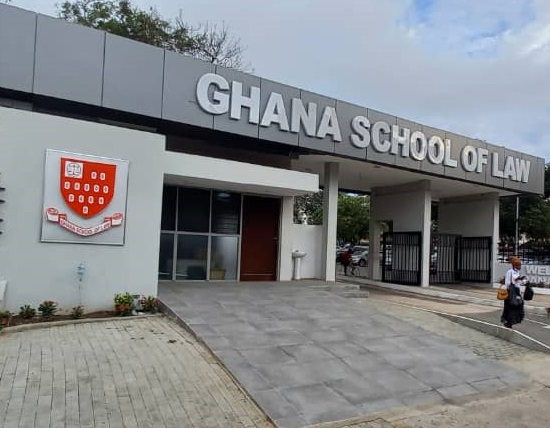 The Ghana School Of Law has come once again, into the news for the wrong reasons as usual due to the mysterious account of happenings ongoing in the school as many Ghanaian students and others find it mind-bugging to understand how things are undertaken in the prestigious institution of many years of operation.

Currently, the school has been reported to have notified a certain crop of people they have certified and approved as those eligible to undergo their various choice of courses to be offered to go ahead and do so even though the criteria earmarked for passing everyone deem appropriate or qualified for the studies, have been shot down giving priority to only a few students that they have approved without explaining in details.

The modus operandi is used in determining the choice of settling on those eligible candidates as issued and disseminated to such unqualified but certified and approved candidates to undergo their various preferred courses of an endeavor.

Reported information communicated to some vital media houses in Ghana by other aggrieved students who think something clandestine and fishy is going on in the system of running the administrative works of the Ghana School Of Law, has put it that, they realized with incontestable facts and undeniable evidence to the fact that the school authorities have sent notices of undefined entrance exams pass marks accorded and credited in the name of certain selected students who they deem appropriate fit and qualified to study under their jurisdiction without any thoughtful reasons given as to why it goes about the procedures and processes involved in determining the fate of such privilege granted students where even those with a high level of academic records and acumen, have been sidelined without formidable explanations.

Therefore, the students on the campus of the Ghana School Of Law, are calling for further digging and verification of processes used leading to the determination of those that they have chosen despite not even having the requisite documents and educational qualifications but on grounds of favoritism and bias coupled with partiality, they have unanimously, passed such candidates to undergo their various choice of courses to be offered at the best of their ability.

The Ghana School Of Law came into the public limelights lately for churning out superfluous and failed lawyers who legally, institutionalized horrendous and porous leadership of performances below the description of mediocrity after their final examination scripts were marked, rendering it the poorest and worst ever in the history of the Ghana School Of Law since its inception.

The facts of the matter on the ground are that criteria earmarked for passing students as eligible candidates after taking the common entrance examinations for the testing of the students who apply for further studies in various aspects of the law are being cloned to favor only a few selected individuals who have the wherewithal to greasing the palm of certain individuals who disguise themselves as the only gateway into the school authorities for attention to be received and by so doing, bypassing the laid down procedures and rudiments meant to be used as a requisite standard based formula for anyone either rich or poor to undergo before he or she secures an admission as an eligible candidate into the school’s campus to study any aspects of the law but nowadays, nothing of that sort is followed but by applying the other unapproved routes leading to the entrance of the school, rendering a lot of other dignified individuals ineligible for further studies.