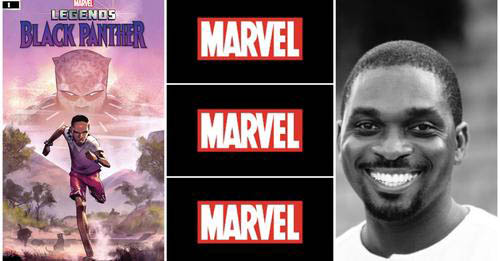 Ghanaian young artist and Illustrator Setor Fiadzigbey, has been selected by Marvel Entertainment to work on Black Panther Comic.

The four-issue series that tells the story of how T’Challa of Wakanda became the Black Panther, in a way you’ve never seen before will be illustrated by Setor.

Read More>>>>>19-year-old Thomas Amoani, Adeiso 8As student promises not to fail Ghana as he arrives at Brunel University, UK

…with his beautiful painterly style that exudes energy in every textured stroke. We knew right away that Setor would be the perfect artist to help bring T’Challa’s early adventures to life. Having a picture book background where we’ve seen him incorporate panels in such unique ways, alongside his more traditional sequential stories, we knew Setor’s art would be both sophisticated as well as accessible to readers who might be picking this up as their first comic. There really isn’t another Marvel comic that looks quite like this one will!

Setor has been drawing since his childhood and has over the years been part of projects in Ghana and abroad, working predominantly in publishing (picture books, comics etc.)

Check out some illustrations by Setor Fiadzigbey below;