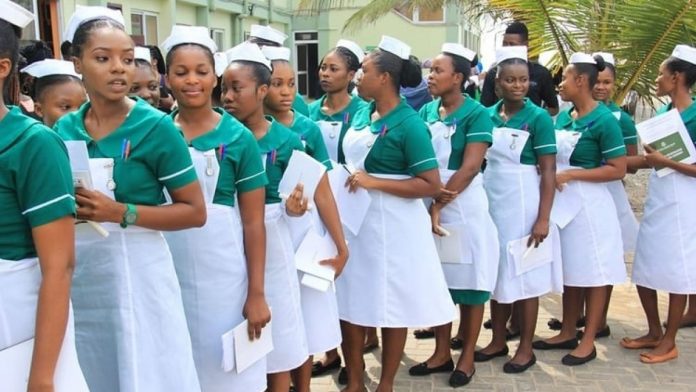 It is reported that some Ghanaian medical professionals are leaving the shores of the country in search of greener pastures elsewhere, where it would be possible for them to live a decent life because of their current conditions of service in Ghana which could not help afford them any meaningful financial stability.

The registered nurses association, confirmed the worrying trend saying, it has come to their notice that, certain individual members of the association are disserting the country at the moment without prior permission from the medical authorities who are the ones managing their affairs.

Professional nurses under the association of Ghana Registered Nurses and Midwives Association, who are mandated to provide medical needs to the Ghanaian people who need their support, are abandoning their professionally assigned roles and responsibilities to pursue various positions and interests out of the jurisdiction of the country by flying to the United Kingdom, Britain.

Some of the nurses who are among those departing from the country are attributing their decision to forsake their duties in Ghana due to the emerging economic unfriendly environment created by this very administration which is obstructing them from saving for the betterment of their foreseeable future.

It is quite evidenced that, financial situations in Ghana are under severe austerities because of the falling standard of the national currency coupled with the high cost of living in the country causing many people to lose their patriotism for the nation.

Prices of goods and services are soaring day in and day out but the salaries of the workers across both public and private sectors of the economy, are stagnant hindering employees to progress steadily in their fields of work.

It is on that basis, that the public teachers in the whole country also laid down their working tools to demand better conditions of service due to the high rise in the cost of living in the country which is negatively impacting a lot of workers across both sectors.

But it is not readily clear, what means and how the nurses are leaving the country, Ghana for the United Kingdom, and Britain, in droves because, it is the same people who are complaining of being paid poorly hence their ultimate decision to cry foul but they can gather money for air tickets to the UK.

The government of Ghana must do something urgently to avert further departure of registered nurses who are leaving the country in their numbers for the UK before it becomes too wanton to curb.