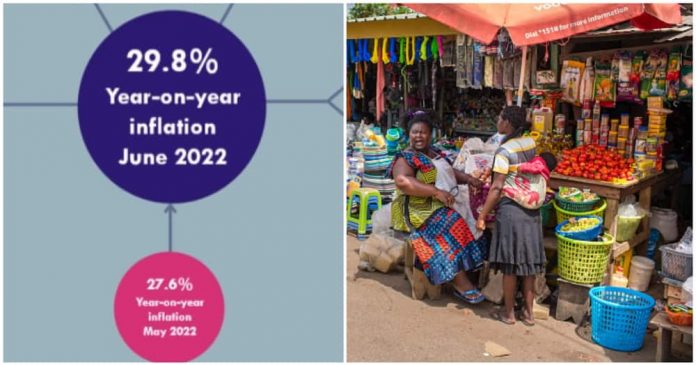 The inflation rate of Ghana is presently pegged at a whopping 29.8% causing the prices of goods and services in the country for further increment while the remuneration of the workers remains like a statue in every part of the country because of the challenges created by the government due to its reckless manner in which the funds for the restoring of the economy are being used by certain few individuals who are closed associates of this malevolent administration.

The situation has become so dire that things are falling from the pockets of all and sundry that they can no longer entertain the failures of government as to how poorly the economy is being managed because of the difficulties in surviving under this comatose economy in the country where profligate spending heavily indulged in by the government and its political appointees which has completely shut down the strength of the national economy.

The consumer price index, CPI, has indicated that the real state of the inflation rate in the country at the moment is 29.8% is the highest ever in the history of the country since the fourth republic.

It is very tough plying trading with the local currency as well because it does not have value as it continues to fall drastically against major foreign trading currencies in the world which is instigating many people to price their goods and sensitive and selected services in the foreign currencies with the sense that the currency of Ghana, is fast depreciating against other trading currencies because if their goods and services are not priced in the foreign currencies, they are going to lose which will, in the long run, affect the stability of their business development.

Financial Debacles in Ghana at the moment, are currently out of hands because it is clear enough to reasonable thought by a certain crop of people in the country who are painfully feeling the harsh conditions created by the government due to its failure to handle the national economy appropriately, that the government has completely lost its total touch on the economic fronts despite the flimsy and unrealistic expectations others are having in the restoration of the dire economic mess in the country at this juncture.

Prices of foodstuffs are skyrocketing in the market squares as many Ghanaians battle fiercely to put meals on the table for their lovely children due to the severity of the ramifications of the state of the situation in the country at this prevailing moment though the government continues to instill hope in the citizens that all is well even though all is not well about those who are on the ground feeling the painful part and impacts of the unfriendly environment created by the government without finding lasting solutions to resuscitate the fast deteriorating situation in the country.

Due to the negative impacts on the economic infractions in the country, public sector workers have been agitating and demanding better conditions of service that the government cushions them a little bit from the ailing state of their finances because the life they are living has become like living in a hell on earth because their economic viabilities could no longer match with the fast deteriorating situation of their financial situations. After all, ask things are soaring like eagles in the sky, there is no way they meager finances will stand based on buying goods and thus, paying for services in any part of the country hence their intended purpose to agitate and if the government remains unperturbed, they will take the next line of an action against the government.

Currently, due to the high rise of in the cost of living in Ghana which is greatly crushing countless people, has compelled the public sector basic teachers to embark on a total strike whilst they hope and appeal to the authorities managing the finances of Ghana, to sort and address their grievances so as to enable them return as soon as possible to the classrooms across the entire jurisdictions of the country which hitherto, if not done, will continue to negatively affect the learning and teaching in public basic schools.

The current action being embarked upon by the teachers, is inarguably, necessitated by the high rise of inflation in the country where the salaries of teachers are not being increased to augment the sprawling economic impact incurred by the rising cost of living standard across every sector.

The teachers are currently requesting for cost of living allowance, cola, which according to them, will somehow, help alleviate the pains they go through in having access to services and needs they want to access, and if attended to, will give them the passion and the urge to return to their various schools for teaching and learning to proceed unabated.

Though the government has indicated through the minister of defense, Dominic Nitiwul that, the government does not have the means to meeting the demands of the teachers, they can only plead with them to return to the teaching fields as their national leadership engages the government on the ways forward.