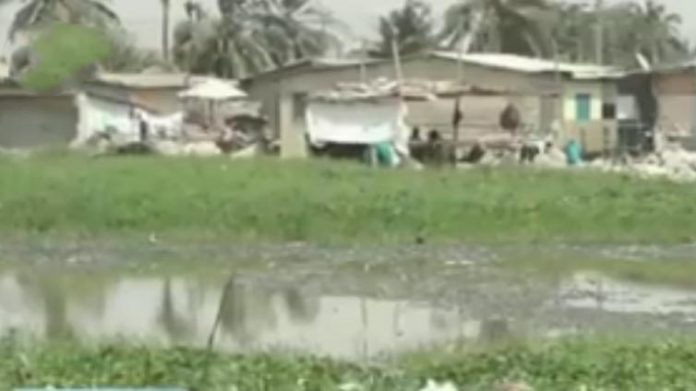 Sea waters are not allowing the residents of Glefe, a typical fishing community in the Greater Accra Region of Ghana.

It is apparent to see how dirty and filthy the entire area has become due to the inability of the residents to maintain proper hygiene practices. Solid materials have taken over the community and the pungent smells coming from the whole dumping centres are overwhelming the newly inhabitants.

Residents are seen attending to nature in the open source as their only means of easing themselves from being embarrassed after consuming food substances heavily. Many houses in the environment have been ravaged by the waves of the sea because of the poor housing system practised in the whole community.

Sea waves have swallowed countless houses in the town but still area folks are in the process of constructing new homes citing lack of available lands or spaces in the vicinity. Dead and rotten animals are all scattered throughout the entire community whereas unpleasant and stench coupled with foul smells have taken a centre stage of the town.

Refuse bins are not commonly found in town as waste materials are left on the floor without giving personal hygiene practices a second thought so as to keep healthy and active minds. Residents could be chanced upon flinging or throwing rubbish into the open drain sources in the area because, there is no one who monitors or checks their irresponsible activities to keeping the plain serene for human habitation.

The Environmental Protection Agency, EPA, is mandated to monitor and check the conditions of such places to instill decent living among the community members but from what is currently happening at Glefe, it has gone out of control. The country Ghana, is touted as a religious nation for God but the manner in which things are done by the same people claiming to be christian believers, needs a thorough review of the mentalities of such people.

Because Christians hold the view that, cleanliness is next to Godliness but it appears it is the opposite that is happening now at Glefe. Previously, the problems of hygiene practices were not so serious in the town during the days of national sanitation activities. Those who live in such a dusty and clumsy environment with things messed up in town, are going to churches to pray and worship God but many are wondering the kind of God they claim to be bowing down to as what God prescribes for them to be doing, is far from their ways of practice.

Human faeces could be seen glaringly on the ground while others unknowingly would step on and by so doing, send such unsightly materials homes to live with. We believe the Light will shine upon those who dwell at Glefe to urgently renew their ways of thinking to at least, tidy up their surroundings because, the unconducive nature of the whole place, is really horrendous to the sights of many.