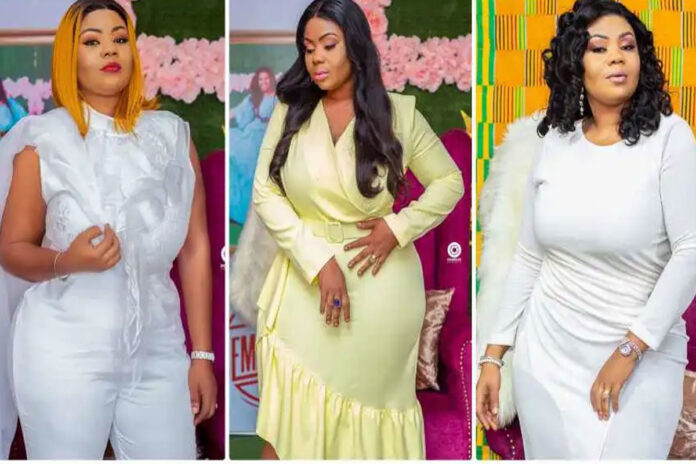 A rather uncomplementary and unreligious pronouncement, has proceeded from the mouth of a Ghanaian songstress who sings to glorify and magnify God for His wonderful and awesome deeds for humanity,

using such detestable expressions by invoking curses of people who may attempt in saying anything derogatory against her after she flaunted her body shape on social media.

Empress Gifty, is currently trending online and on the lips of countless Ghanaian people including those that her gospel tunes have been impacting positively for calling on anyone who condemns her on social media after which she intentionally posted photos of her splash body online to see how some people are going to react and when they reacted too due to the manner in which she displayed her body, she has gone ahead calling for the name of thunder to strike those who will try any means to say anything negative about her body which is meant and consecrated to be the blessed temple of God in which He dwells.

According to her, she knows certain individuals on social media who have turned into social commentators by devoting their whole resources just to condemn and chastise people at the least mistake that they may have committed either intended or unintended. Her rather unchristian speeches have been distanced from scores of Ghanaian christian believers because her statements were meant that she is seeking to avenge herself in case anybody offends provocatively as a result of what she did ignorantly by being carnal and sensual during which she exhibited her precious body parts of social media waiting for people to give their comments about the whole act which has been berated in no uncertain terms because such behaviours do not adore and exult the Gos that we worship and extol in our various religious gatherings in Ghana and other parts of the world.

Her unethical and world attitude has angered those who are greatly affected by her utterances that seek to issue and warn people from talking about her body which she voluntarily posted on social media as the worldly people have been doing.

The gospel singer Empress Gifty who is noted and respected widely for her religious and spirit filled songs she has been composing and singing, this time around, has got it entirely inaccurate for threatening people with the lightening of thunder if anyone goes out to talk about her body shape when she intentionally showcased it social media for the patronage of the general public.