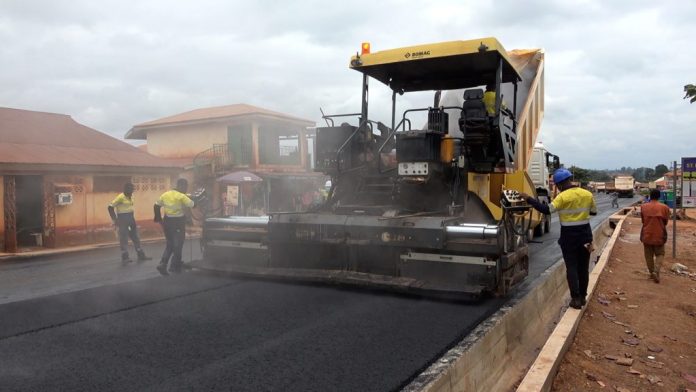 Scores of dwellers putting up along the stretches of Kenyasi and Hwidiem communities in the Asutifi North District of the Ahafo Region can now heave a sigh of relief as government commences a speedy process in giving a facelift to their old age deplorable roads in their localities.

The construction of the 8.2-kilometer road that links Kenyasi and Hwidiem communities, has attracted the benevolence of government because the residents have decided not to leave any of chance until the authorities do something understandable about the poor state of the road networks in their vicinities.

As the government takes a bold step to rehabilitate the long-standing bad roads in the two adjoining communities, residents are beaming with smiles as they witness the smooth progress of the road construction works ongoing in the two communities earlier indicated.

They have, therefore, expressed their heartfelt gratitude to this incumbent government for heeding their numerous calls on the authorities to help restore the beauty of the area back to normalcy. Previously before the construction of the 8.2-kilometer road networks in those two localities began, residents were visibly seen, battling with the bumpy and dusty nature of the road which was making life unbearable for them.

According to some members living in the two communities, they used to breathe dust into their nostrils after the roads deteriorated but as it stands now, the filth and the unpleasant feeling of such days are over because they are really happy to behold the breeze of a new era.

The 8.2-kilometer road, when finally completed, is expected to boost economic activities in the adjoining areas as many people living there are mostly farmers.

The road engineers who have been tasked to rehabilitate the roads are fervently working with grandiose purpose and quintessence assiduousness to complete the assignment on schedule. Some earlier reports had it that, the residents have vowed not to partake in any national exercise any longer unless their roads are fully tarred and fair enough, they have won the heart of the government when it released funds meant for the construction to the officials it had assigned the project for to.