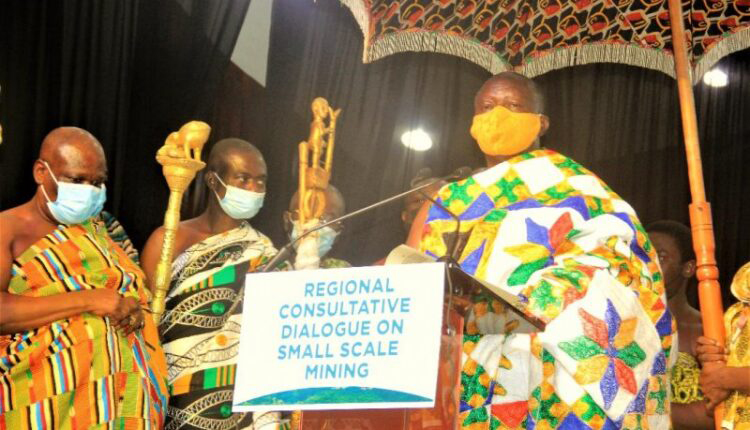 Asantehene, Otumfuo Osei Tutu II, has admonished stakeholders in the fight against illegal small-scale mining (galamsey) to focus on the job at hand devoid of greed, dishonesty and hypocrisy.

Otumfuo Osei Tutu, who was addressing the maiden Regional Consultative Dialogue on Small-Scale Mining in Kumasi, called for unity and tenacity of purpose as the Government sought to advance legitimate and responsible small-scale mining.

The mining sector, he said, had so many prospects for the nation, citing its invaluable contribution to economic growth, especially in the area of wealth creation and poverty alleviation.

Therefore, the relevant regulations guiding the sector must be respected, he advised.

Otumfuo Osei Tutu said that was necessary in order not to compromise on the sustenance of the biodiversity and ecosystem.

He bemoaned the wanton destruction of farmlands, water bodies and forests in the course of illegal small-scale mining, stressing that the Metropolitan, Municipal and District Assemblies (MMDAs) were expected to tackle the menace head-on.

Mining close to water bodies with harmful chemicals and other unhealthy practices that caused damage to the environment must be critically looked at, the Asantehene said.

He said the noble idea behind the national crusade to sanitize the small-scale mining sector would not be realized if offenders were not dealt with in accordance with the law.

“Wrong is wrong and right is right irrespective of the personalities involved,” he cautioned.

Otumfuo Osei Tutu pointed out that the sophisticated nature in which illegal small-scale mining had assumed called for drastic measures in addressing it.

He called for all hands on deck to help repair the damage caused the nation’s water bodies and environment.

Mr Samuel Abu Jinapor, the Minister of Lands and Natural Resources, explained that the Regional Consultative Dialogue aimed to decentralise discussion on the way forward for the small-scale mining sector.

The objective was to provide input into the national discourse on the regularisation of the sector through coordination of diverse views.

It was also to develop appropriate policy options with the overarching goal of improving the operation, regulation, management and good governance of the sector.

“Sustainable Small-Scale Mining for National Development”, was the theme for the Dialogue, which brought together participants from the Ashanti, Bono-East, Bono and Ahafo regions.

The 2017 Country Environmental Analysis by the World Bank said environmental degradation costed the nation about US$6.3 billion or nearly 11 per cent of the Gross Domestic Product (GDP).

The report, which was part of the Bretton Wood’s Institution diagnostic study on the economy, revealed that non-renewable resources such as gold and oil could not sustain growth as resources depleted, while renewable resources like cocoa, timber and other tree and food crops depended on good environmental stewardship.