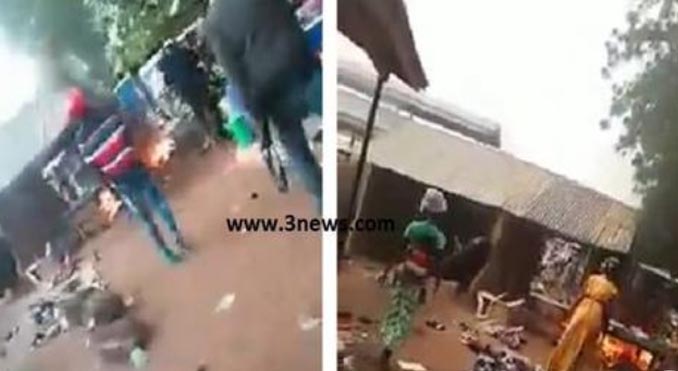 It was a horrific scene all in the township of Binduri, when unknown gunmen besieged the town guns and machetes. The unknown gunmen suspected to be members of some terrorists group, have taken over by the entire community, butchering whoever they met on their sights.

People in the community have fled from the town for fear of being killed as the terrorists invaded many other localities in the town, rendering people in bad state. Those who have had left the community are not willing to return anytime soon as fear and panic had gripped them.

The ministry of the interior has been pleading with everyone in the country to be on high alert as it suspects attacks on the citizens from certain deadly groups that are planning to launch mayhem on Ghana. It is however assumed that what happened in Binduri might just be a tip of the iceberg in preparation of the untold events in the coming days or weeks.

Some people have been living in fear in Ghana because our own security forces are on the rampage killing innocent civilians without any crime being committed on their part at their various locations of the state. The National Security ministry, is expected to issue a statement concerning its understanding of events in the Binduri township.

When the ministry comes out with its view of what took place where gun welding men invaded the Binduri community intimidating everyone on board. According to the ministry’s earlier updated information on security matters in Ghana, it educated and entreated everyone living in Ghana to be extra vigilant as the ministry received a tipoff of some clandestine move from the camp of suspected islamic militants group, boko haram and its related affiliate bodies.

Boko haram group has been killing people in many parts of the African Sahara regions despite others military personnel patrolling in various townships to restoring peace and security for the citizens. However, Ghana is somehow lucky in such scenes as our security forces are always mounting checkpoints to forestall an unforeseen disaster that the terrorists may try inflict the country with.