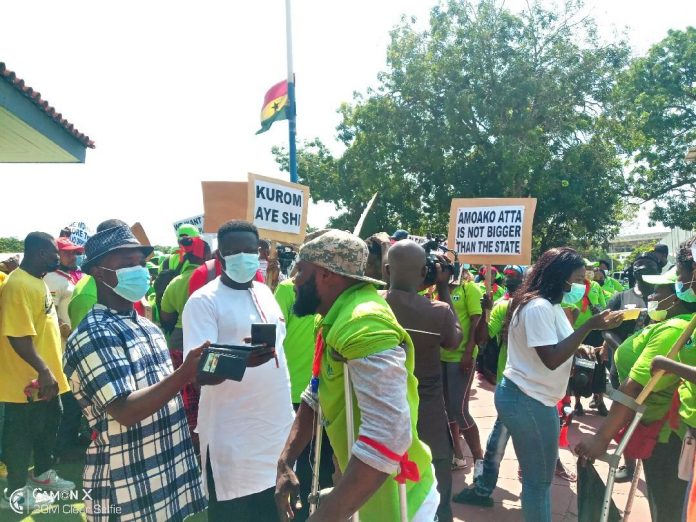 The closure of toll charges across the country which had been replaced by the introduction of electronic banking charges caused countless people who are lame and handicapped, and based on the redundancy the closure incurred such vulnerable individuals who were making ends meet by that work, are currently crying with deep lamentations and moaning as to why the government would lay them off and yet their various salaries would not be paid them so that they may not be depending on others entirely for survival and further means.

The former workers who were assigned by the government to be collecting the toll levies on behalf of the state as a measure to accrue money for the progress of the country, demonstrated yesterday on some notable streets of the national capital, Accra to drive home and their demands that something drastic must happen quickly to turn things around for them because they can no longer seat down aloof and fold their arms and be expecting manna to fall from heaven.

They took the opportunity to register their displeasure and anger against the decision of the government not to pay them even though they worked before the abrogation of the toll operations.

The ex-operators, who stormed the house of Parliament yesterday, did so to tell the legislature that all is not well with them because they are suffering too much due to the loss of their job which makes it possible for them to eat quite well when the toll levies collection was in session.

They went to the Parliament House with placards indicating that they are hungry and thus the government must come to their aid before things run out of hand.

It was a sad moment seeing such defenseless people with varying degrees of medical difficulties protesting and weeping yesterday at the forecourt of Parliament to just tell them and the whole world that, they are feeling hungry as stated on some of their placards boldly without any compunction because they meant what they were doing so that there will be some sort of transformations coming into their lives.

The leadership of Parliament yesterday, graciously allowed them to forward their concerns and challenges to their authorities so that they would help in fast-tracking their desires despite the abandonment of the toll levy collection.

The government of Nana Addo promised the former workers that the government would reassign them to various sectors of the employment module to alleviate some of the challenges facing them after their redundancy but the government is yet to fulfill such a heartwarming assurance given to the ex-operators of toll.

Even if the government would not employ them again even though they were assured, how is it their arrears have not been paid? They are people with diverse kinds of special needs but the government does not take a second look at the conditions in which they are enduring presently.