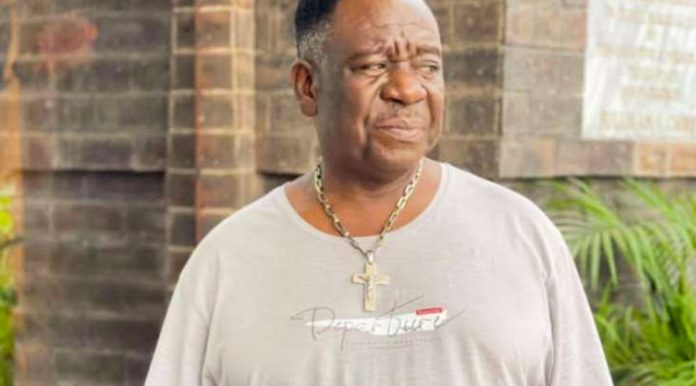 Nigerian entertainment icon Mr Ibu, has disclosed that after some known figures attempted to kiss him through poisoning of his drink and food substances, is very mindful of the kinds of people who are going to try by means of acquainting themselves with him after he graciously survived their attempted destruction of his precious life.

The funny and humorous actor, stated that he almost kicked the bucket in the process after he suspected of food poisoning which landed him in a hospital for several weeks before he regained his conscience.

He revealed that there were many lessons that he finally deduced from the attacks unleashed on his personal life by some disgruntled and aggrieved individuals associated with him who thought he was rising exponentially than they could and as a result of that, they planned secretly to terminate his life so that everything will end over there but by the grace of God, he did not die even though he went through a lot of excruciating lamentations and moaning against the tragedy that befell on his life.

He therefore stressed the need for all and sundry to be very cautious about the Kinds of people who hang around us and smile with us at all times that we should be very mindful of such people because if there is anything untoward that would happen to us, such a thing will come from those individuals even though not all of them but we must open our eyes meticulously so that we are able to prevent such heinous and nefarious attacks being launched spiritedly against our lives.

In his view, there is no way people will conclude that he does not know those who attempted his life because those individuals are well known to him and they are such closed associates with his acting career but he will be silent on their identities for the mean time even though he could mention their names publicly but he wants to wait for a while so that more thoughtful decisions could be arrived at before the next line of actions taken in due cause.

It had been reported few months ago that the legendary Nigerian actor, Mr Ibu was poisoned through food substances and some rumours had it that he gave us his ghost spirit after he was admitted at the hospital when doctors detected that his condition emanated from a suspected food poisoning after a series of medical checks conducted on his body.

The generous medical officers at the hospital took their time and made sure they were able to treat the breadwinner of many families so that he could regain his life and mercifully, he recuperated well when the medical officials at the hospital in which he was admitted in mounted surveillance attrition on his ultimate health conditions arising out of the severity of the purported food poisoning which later brought him back to life and he becomes full of life, feeling as fit as a fiddle to the joy and happiness of his family, cohorts and loved ones in the film making industry.