Agya Koo, a seasoned Kumawood actor, has admitted that he came dangerously close to going blind throughout his career.

According to a recent interview with the actor, his medical condition prompted him to shoot the majority of his films during the day. 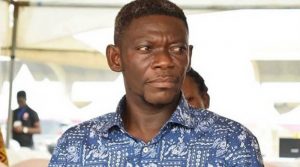 He believes that his visual difficulties were caused by the high voltage of the lights utilized during filming.

According to the actor, he drew the attention of numerous producers, who were preparing to put an end to his career through a series of incidents at the time.

Agya Koo revealed in an interview with Kumasi-based radio station, Angel FM, how he had been treated unfairly by several film producers, which resulted in his final blacklisting.

Mawule Ekpe Peter, the Public Relations Officer for the Film Producers Association of Ghana (FIPAG), has responded to the actor’s assertions by challenging him to present names of those who have worked with him.

Mr. Mawule went on to say that there are still producers that want the actor’s services and would be delighted to have him on set.

Communication between the actor and the anonymous producers, he said, was necessary in order for the former to revive his career.