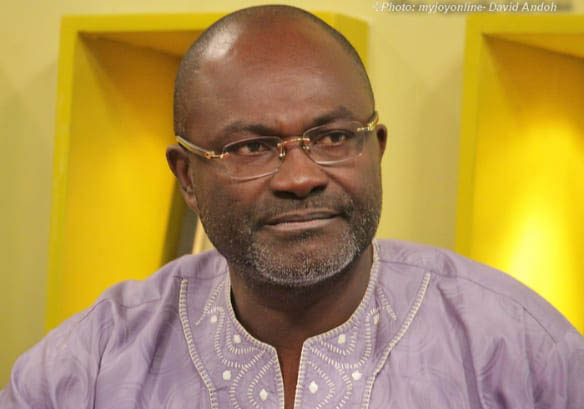 • Kennedy Agyapong says he is ready to face the Privileges Committee

Kennedy Agyapong, the Member of Parliament for Assin Central has denied inciting the public against Erastus Asare Donkor of Luv FM.

Read Also>>>>> Dare me and I will expose you – Kennedy Agyapong warns CEO of Multimedia, Kwasi Twum

Kennedy Agyapong in an Oman FM interview stated that he did not make statements of threats against the journalist. He confessed to stating that he would have had him beaten if he was president of the country but did not mention death as one of the ways the situation could be dealt with.

“Who is he? Which kind of human is he? Is he better than those who are dead? He is not better than them. I never said he should be killed. I said that if I were the president, I would have lashed him and beat the hell out of him. I never said anyone should attack him.” He said.

Kennedy Agyapong also expressed disappointment in his fellow MPs on the NPP for not defending his actions. He observed that when the Minority Chief Whip Muntaka Mubarak made allegations against the judiciary, none of his colleagues took up the matter to the Privileges Committee.

‘I’m disappointed in the NPP because when Muntaka made bribery allegations against the judges, no NPP member stepped up to say he should be taken to the Privileges Committee. We should not follow money and allow Ghana to be plunged into chaos. They’ve made up their minds to kill,” he said. Kennedy Agyapong also took on the Member of Parliament for Tamale North, Aihassan Suhuyini who first raised the issue in Parliament.

You cannot use the media and police to gag me. You make a statement that I should be referred to the Privileges Committee. I want to insult him. He is a foolish MP Suhiyini is so stupid. He hasn’t achieved anything in life so he wants Ghana to burn down. I’m so disappointed in him. He uses everything for politics. They have taken me to the Privileges Committee. They think MP is the only thing I rely on. If they are removed from Parliament, I will continue to tell the truth. None can stop me, he said.

Kennedy Agyapong insists he is acting in the interest of the country and will not allow the media house which Erastus Asare Donkor works with to plunge the country into chaos.

I will continue to speak the truth and not let anyone silence me. The truth is that Joy FM has been disgraced. They should write apology letters to the families that lost their relatives in the Ejura incident They should also write to those injured as well. I still repeat that they are corrupt. I dare Kwesi Twum and he claims he didn’t say it, he should be ashamed of himself.

He said it in my office that the staff of Joy FM are threatening to sabotage the government because we don’t take care of them. If they push I will expose all the things about Joy FM. I’m going all out.”

Kennedy Agyapong has been hauled before the Privileges Committee of Parliament after he made some statements against Asare Donkor over his coverage of the Ejura incident.

Alhassan Suhuyini who initiated the process is hopeful that Parliament will take a decisive step on him.