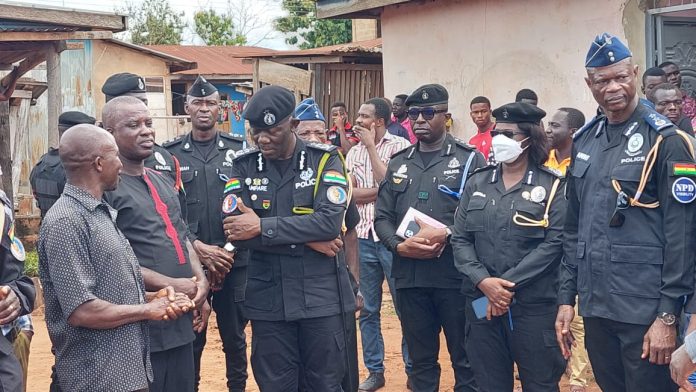 The bizarre circumstances leading to the death of a youth activist in the Nkoranza community, is not going away anytime soon as the Inspector General of Police himself has visited the scene of the incident with top security officials from the headquarters.

The Inspector General of Police has announced that, he heard a lot of issues regarding the death of Albert Donkor to left him to be suspicious of a certain mischief of the part of some people that he is not going to reveal now until further informations have been gathered.

The community dwellers in the Nkoranza district, had accused the police administration in the town for brutally torturing Albert in the police cell leading to his untimely death upon series of allegations put at the doorsteps of the police officers in that area which they have denied any wrong doing relating to the alleged brutallities meted out to the activist until he breathed out his last.

Some unconfirmed sources in the area simply put it that, the police administration in the town killed the boy intentionally because, they concluded that, Albert Donkor has been a thorn in their flesh which was not giving them peace of mind to go about their lawful activities in the town.

According to the Inspector General of Police, Dr. George Akufo Dampare, his men are fervently on the ground from now until detailed informations are picked up to ascertain the real cause of the death of Albert which some people have blamed the police officers of having a hand in the untimely departure of the son of the soil.

The top most police officer stated that, his men on the ground are not a threat to anyone or property and thus; they are only on a fact finding mission and not on a fault finding mission just to unravel the real cause to death of the activist which incited the entire citizenry to register their displeasure over such injustices in our system.

As the police officers are on the lookout for the killers of the activist, some are saying they are only going to cry over a spoilt milk because, the alleged murderers of the activist should have been found long ago the moment they terminated the precious life of the guy in question but due to their lackadaisical attitude, they cloned the identity of anyone implicated with the issues of killing Albert and now that they claimed to be on a fact finding mission in the community to worsen the agony and vexation of the community members.

Many members in the area, have simply arrested their case, saying, they leave everything in the hands of their ancestors to bring them justice for they do not trust the police administration in the town. The police top hierarchies in the area have been accused of shredding their men and women who criminally engaged themselves in some atrocities and mayhem endangering the lives and properties in the citizens in the community.

If in case that those men the Inspector General of Police himself have brought to the ground are able to unravel those who committed the alleged murder, how will it sound in the ears of people who doubts of the integrity of the police administration because, it is believed that; A cat does not arrest a cat”, they are birds of a feather and by that assumption, walk together knowing who is good or bad amongst their cohorts.

Many have questioned the training regime of the police administration describing it as a sub standard one that is why extra murder cases are not being brought to book.