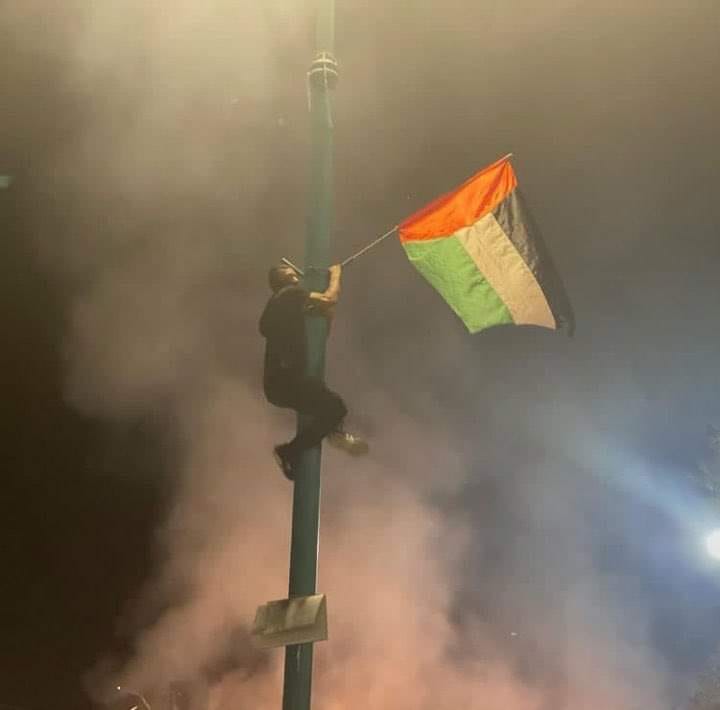 Protests by Israeli Arabs in Lod escalated to full-scale rioting, with protesters throwing stones at police, who responded with stun grenades.

The violence caused Prime Minister Benjamin Netanyahu to declare a state of emergency in the city on Tuesday night. It was the first time the government had used emergency powers over an Arab community since 1966, The Times of Israel said.

Mr Netanyahu, who went to the city to call for calm, warned he would impose a curfew if necessary and said extra security forces had been sent there and to the city of Acre.

“The riots we saw tonight are an unbearable reality. It reminds us of sights from the past of our people and we cannot accept it – certainly not in our country,” he said.

Why an Israeli mayor is warning of civil war
Israeli media reported that synagogues and several businesses had been set on fire, while Reuters news agency said there were reports a car driven by an Arab resident had been stoned.

“All of Israel should know, this is a complete loss of control,” Lod Mayor Yair Revivo was quoted as saying by the Times of Israel. “Civil war has erupted in Lod.”

Ben Gurion Airport, Israel’s main international hub and one of the country’s busiest, briefly halted flights on Tuesday and an energy pipeline between the cities of Eilat and Ashkelon was hit.

There has also been unrest in other cities with a large Israeli Arab population, as well as in East Jerusalem and the West Bank.

What has caused the violence?
The fighting between Israel and Hamas was triggered by days of escalating clashes between Palestinians and Israeli police at a holy hilltop compound in East Jerusalem.

The site is revered by both Muslims, who call it the Haram al-Sharif (Noble Sanctuary), and Jews, for whom it is known as the Temple Mount. Hamas demanded Israel remove police from there and the nearby predominantly Arab district of Sheikh Jarrah, where Palestinian families face eviction by Jewish settlers. Hamas launched rockets when its ultimatum went unheeded.

Palestinian anger had already been stoked by weeks of rising tension in East Jerusalem, inflamed by a series of confrontations with police since the start of the Islamic holy month of Ramadan in mid-April.