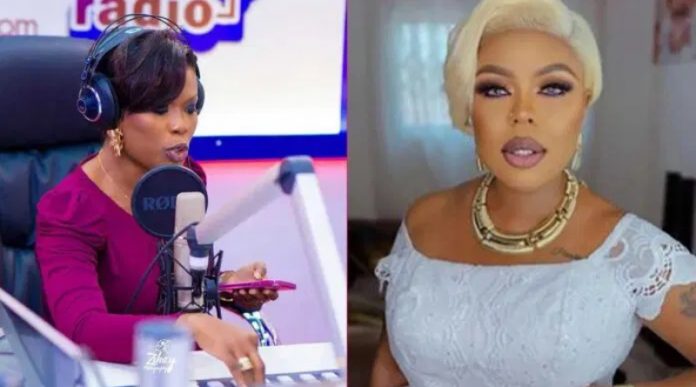 Renowned broadcaster, Deloris Frimpong Manso has once again responded to claims she is a braggart, insisting that she has rather won the bragging right for her ability to garner unparalleled ratings.

“I’m not just any presenter; I’m senior presenter Deloris. They say I brag; I’ve earned the bragging right, you get it? I’ve already told you I’ve defeated all the other presenters. I’m not bragging; the numbers are there,” Delay, as the presenter is affectionately called, said on Wontumi Radio’s ‘To Wo Bo Twi Me’ drivetime show.

In what appeared to be a dig at an unidentified radio presenter, Delay, sounding authoritative and confident, cast innuendoes, likening her fame to American show host, Oprah Winfrey.

“So, small girl, don’t compare yourself to me, I’m a senior presenter, I’m not your mate. If I were in America, I would have been on the same level with Oprah Winfrey so much that it would take you more than 10 years to book an appointment with me but because I’m in Africa, we’re in Ghana, so, you lack respect for the elderly,” Delay noted.

She continued: “I’m not your regular presenter. I’m referred to as ‘madam’ when you come to my house because I’m a madam. And once your madam, always your madam.”

Tonardo had mentioned although Afia Schwarzenegger earlier made a post suggesting that she had been employed as a broadcaster with Wontumi Radio, the appointment eluded her as Delay was rather chosen.

“Deloris has been picked over you. She has been gainfully employed and doing your work. Once your madam, always your madam’ you can’t beat her; just concede defeat,” Tonardo remarked.

Considering that Delay chorused the ‘Once your madam, always your madam’ statement, some have argued that her comments were indeed directed at Afia Schwarzenegger.

Delay and Afia Schwarzenegger fell out long ago. It is, however, unclear what led to that.

Delay in 1999 started her broadcasting career with Life FM in Nkawkaw in the Eastern Region. She joined Top Radio, Accra, in 2005 as a midmorning show host until 2007. Between 2007 and 2016, she worked with Oman FM. While at Oman FM in 2008, Delay started her television show ‘The Delay Show’ which has been vibrant to date.

After going off radio for a while and focusing on The Delay Show, Delay is back on air as host of Accra-based Wontumi Radio’s drivetime show.