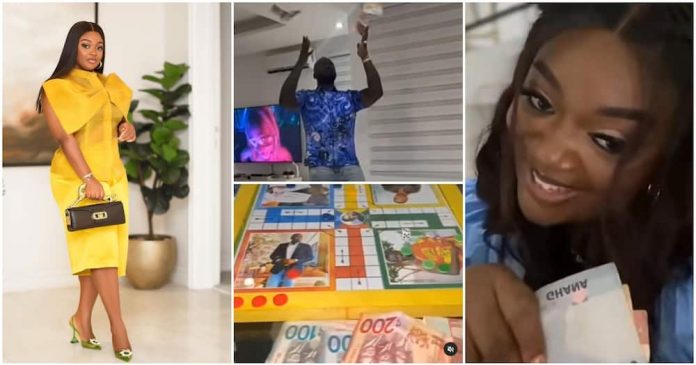 Due to her massive crowds storming influence in the entertainment industry, she continues to win the hearts of countless Ghanaian people into her fold of classical sensational nightingales of display and cozy enjoyment with lavish splashing of foods and drinks on the lives of those she hosted into her most iconic much talked about mansion in the country.

Jackie Appiah as she is affectionately called by her enthusiastic fans, has decided to celebrate those she considers to be playing a very key and pivotal role in her industry business activities, has planned to shower them without what they were not expected to have been touched with since this year’s celebrities party she organised for them was most exceptional as compared with the previous ones.

Enjoyment became nothing to talk about at her current splash mansion with beautiful and glamorous decorations all over the serenity of its ambience, Jackie Appiah, has blessed her colleagues in the entertainment industry with classic wines and mouthwatering foods that they could not dream of filling their bellies with when she hosted them in her newly crafted mansion which has become the talking drum in the town.

Her newly built mansion with first class touching features, has been the major talking points in town as she displays it nowadays on social media to tell the world that she has made it through hard work and sacrifice coupled with the spirit of adventurousness and assiduousness which has caused it for her in a possible way to have the cause to celebrate her God given talent.

As she invited some selected industry players concerned with her career into her private mansion, it has emerged online that, the kinds of elegant attractions to behold in her premises, was really touching and kissing since they mammothly celebrated one another in a grand style with varieties of drinks and foods that could cost several millions of Ghana cedis.

According to some entertainment industry gossips, Jackie Appiah has invited her loyalists and other entertainment folks into her personal mansion which everyone has caught up the attention of the young and old, simply because, she intended to showcase how splendid and tumultuous the appearance of her luxurious mansion looks like and by an extension, introducing same to the cheers and smiles that could arouse such individuals celebrations during the party fantasies in her private mansion.